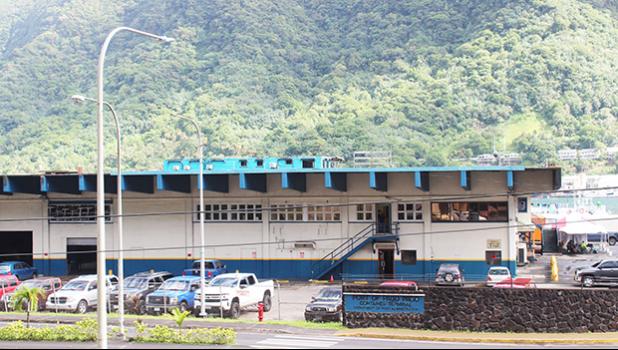 Pago Pago, AMERICAN SAMOA — The Port Administration Department main building at the Port of Pago Pago has been condemned by the Health Department (DoH) and will be demolished as tenants have already been informed that they need to move out, and the Department’s main office is relocating as of next week.

In a brief media statement on Wednesday this week, King announced that the department’s main office would be relocated to the Pago Plaza 1st floor effective next week Tuesday, Oct. 12th. But it gave no explanation behind the relocation, although some in the private sector say they were informed about such a move during the past couple of weeks.

Responding to Samoa News queries, King confirmed yesterday that Port Administration is moving out of the building on the main dock, as well as everyone else that occupies space in it.

“The building will not be renovated.  We will be demolishing it, and the space repurposed for container storage,” he said and explained that after several months of trying to mitigate the Public Health Hazards associated with the building — which were identified during Health Department inspection — “it  was ultimately condemned by DOH.”

“The work involved to correct the findings were extensive, and would be very costly to fix,” King said, adding that some of the major hazards identified were:

• wide spread and recurring black mold due to continuous water leaks from the wide-ranging and numerous cracks in the flat roof;

• spalling and cracked overhead cement beams/walls, where in some areas there were hazards of falling chunks of cement.

He said that Port Administration’s decision to vacate the building was also based on its long-standing plans to remove the building and expand the container yard.

He pointed out that this project is listed in the 2001 Port's Master Plan, but has never been implemented for a number of reasons — namely the lack of funding to remove and build a replacement building.

“In reality, the DOH condemnation order has become the catalyst expediting the timeline to remove the building,” he said, adding that a Port Administration notice to abide by the DOH directive and to vacate the building was sent out to all of the tenants on Aug 31st.

“The rebuilding of a new port building will not be in the same location, but instead elsewhere within the port property that will maximize the limited port space, and provide more storage area for containerized cargo,” he said.

Additionally, the new building will house Port Administration, Customs and potentially other ASG clearance party agencies.  “We expect this project to be completed within the next 12-20 months,” King told Samoa News.

“We kindly remind the public to mask up when entering the facility. We look forward to serving you at our new location,” according to the statement.

Samoa News wasn’t able to get information at press time as to where other current tenants — such as Customs Division — will relocate.