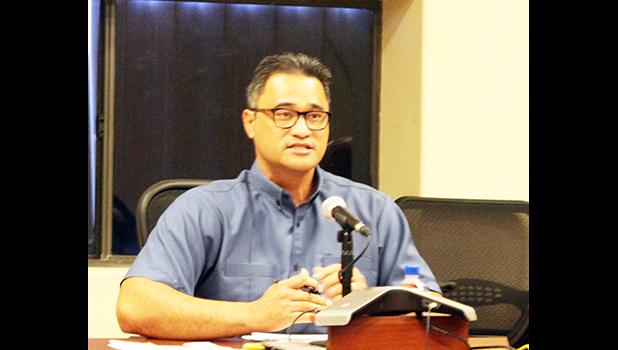 Pago Pago, AMERICAN SAMOA — The Lemanu and Talauega Administration is beginning preparation for the governor’s annual report to the Fono next year and a memorandum has gone out to cabinet members for what’s needed from them.

Under local statute, the sitting governor is mandated to deliver the State of the Territory Address during a joint session of the Fono on the second Monday in January of every year.  The address usually covers ASG’s financial status, economic conditions as well as accomplishments in the previous year and what’s coming in the future.

In a Sept. 3rd memo, Acting Gov. Talauega Eleasalo informed cabinet members of preparations for the up-coming State of the Territory address in January 2022.

He said that all departments, agencies, offices and authorities are required to submit a comprehensive Accomplishment Report detailing all major accomplishments for the Year 2021, including all pending projects and agenda an for the coming year.

According to the acting governor, the report should also include program or project challenges, if any, currently being faced and solutions being planned to mitigate those issues.

For example, the template included with the memo, asks Cabinet members to provide details profiling what the agency/department accomplished in the first year of the administration. It also asks what challenges lie ahead and how can they be overcome. For opportunities, it asks where do the greatest opportunities lie and how can they be realized. Under “goals”, the cabinet member is asked to identify priority goals. There is also room for the cabinet member to share comments/conclusions.

Talauega said the reports must be submitted to the Governor’s Chief of Staff, Tuimavave Tauapa’i Laupola no later than Friday, Nov. 12th this year.  “I appreciate your continued hard work and dedication in carrying out your responsibilities and services to our people,” he concluded.

January 2022 will be Gov. Lemanu Peleti Palepoi Sialega Mauga’s second State of the Territory address to lawmakers. One accomplishment that the Administration is expected to address is the repatriation flights, which Lemanu promised during his inaugural address after being sworn in as governor on Jan. 3rd this year.