Probable cause found in drug case against Siaumau Jr. and Vaavale 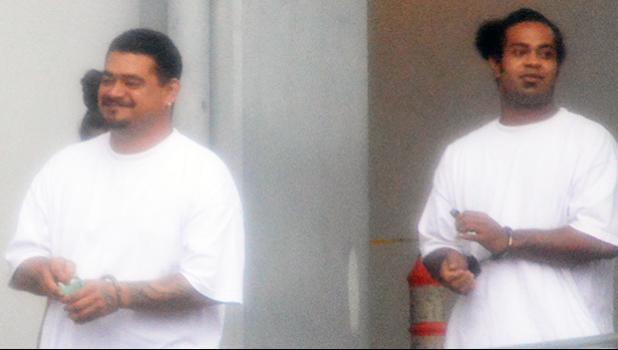 Pago Pago, AMERICAN SAMOA — The case of two men charged with unlawful possession of meth has been bound over to High Court, after District Court Judge Elvis P. Patea found probable cause to support the charges, during a preliminary examination hearing this week.

Prosecuting the case is Assistant Attorney General Christy Dunn, while Assistant Public Defender Anna Whiles is representing both men, who remain in custody.

During court proceedings Wednesday afternoon, prosecutor Dunn called one witness: DPS Vice and Narcotics Det. Justin Thomsen who testified that the main purpose for executing a search warrant at the Siaumau compound in Petesa on the afternoon of July 12, 2019 was to search for an inmate by the name of Thomas Siaumau, who escaped from confinement July 3rd.

Upon arrival at the Siaumau compound around 1p.m., Thomsen said he observed 4 men standing in a corner behind the Siaumau mechanic shop, while other men were sitting on an old vehicle.

He said that based on information he received from one of his Confidential Informants (CI), Va’avale is one of the drug dealers at Le Aute, while Oloaga deals drugs at Logotala. He said he knows Logoai because he works as a security guard at the main wharf, and Siaumau is someone he’s known for a long time.

Thomsen said the group appeared to have been in the midst of a meeting that was interrupted by police presence. and they attempted to hide themselves from law enforcement.

Cops stormed the area were the men were standing and instructed all of them to remain still and place their hands above their heads. According to Thomsen, all 4 men seemed nervous, especially Siaumau Jr. and Va’avale.

While frisking Va’avale, Thomsen said he noticed him attempting to push a black bag underneath a small table near the center of the group. Thomsen confiscated the bag and found 48 medium sized clear ziplock baggies; 2 separate bags containing 25 small stamp sized baggies; and 2 medium sized clear baggies containing a clear crystalline substance, which appeared to be meth.

Cops found $360 in cash on Siaumau Jr. when they searched him.

Dunn asked the witness if he ever had a chance to interview Va’avale and Siaumau regarding the black bag. Thomsen said yes, and added that both men presented written statements to police.

According to Thomsen, Va’avale said the bag was in Siaumau Jr’s hands when police entered the compound. However, before the cops turned the corner, Siaumau Jr tossed the bag to him to hide. The bag hit him in the chest and fell to the ground. Va’avale said he tried to push the bag under the table with his foot.

Thomsen said Va’avale admitted that he works for Siaumau as a mechanic and there are times that Siaumau pays him with meth.

Thomsen said Siaumau Jr. kept changing his story during questioning. However, at the end of the interview, Siaumau Jr. admitted to having possession of the bag. He said the bag was initially payment for services on multiple vehicles, and he did not want the payment but took it for the time being.

According to Thomsen, Siaumau told him that the bag was untouched for about a week. He claimed that he worked out a different form of payment — he wanted to be paid in form of a vehicle for him and his wife, and he was in the process of returning the bag to the person who gave it to him when police arrived. That’s when he ran to the back where the group was, and tossed the bag to Va’avale to hide.

The crystalline substance found in the bag tested positive for meth and Thomsen said the street value is around $25,000 to $30,000.

Dunn asked Thomsen if he knew why these men gathered at Siaumau’s compound on the day in question. Thomsen said that based on information they received from several CIs, they were about to split the drugs inside the bag and sell them off to their regulars.

During cross examination, defense attorney Whiles asked the witness if it’s true that the reason why Samatua Logoai, who was at the Siaumau compound during the raid, was there — to help the police by providing information for their search.

With a smile, Thomsen replied, “That’s not true, Counsel.”

“Did you find any drugs on both of my client’s bodies on the day of the incident?” Whiles asked. Thomsen said no.

“Did you see them holding the bag containing drugs?” Whiles asked. Thomsen again replied no.

Patea said that based on the evidence presented by the government, the court is satisfied that there is probable cause to bind the case over to High Court.

He said that despite strong opposition from the defense, arguing that there were no drugs found on the two defendants’ bodies, it is clear from the detective’s observation — along with the statements the two defendants provided to police — that the bag containing drugs belonged to both of them.

Patea reminded the defense that the only job of the court is to determine whether there is probable cause to bind over the case, while the jury’s duty is to determine all the evidence and the facts of the case during trial.