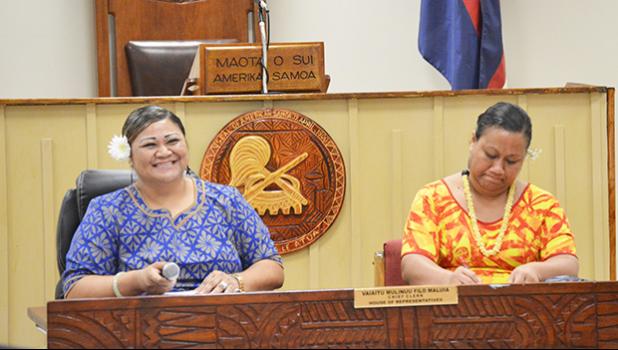 Pago Pago, AMERICAN SAMOA — Two convicted felons hired by the American Samoa Government (ASG) has raised a lot of questions from members of the public. However, there has been no official response from the American Samoa Government (ASG), which includes the Department of Human Resources (DHR) and the Governor’s Office to Samoa News inquiries made last week, following comments and complaints by ASG employees and members of the public, pointing out that two such people are currently employed by the government.

Samoa News was told that one was hired last week, while the other was hired at the beginning of the new Administration.

Reliable sources in ASG have told Samoa News that Kerisano Sili Sataua, a former Director of the American Samoa Department of Education (ASDOE) was hired last month by the Department of Treasury as an Assistant to the Treasurer. The position was never advertised (in-house or otherwise) and the hiring of the Sataua did not follow proper procedure.

Samoa News was informed by a government source that Sataua was pardoned by former Gov. Lolo Matalasi Moliga and so all of his rights are restored, and his conviction no longer a barrier to being hired by ASG.

Samoa News was also told that Patolo Mageo, a former Director of the American Samoa Department of Health and Social Services (DHSS) was hired by the Governor’s Office at the beginning of this year. (It is unknown if Mageo was pardoned.)

Local law prohibits ASG from continuing to employ or to hire those convicted of felony fraud, stealing or embezzlement.

Samoa News received numerous comments and complaints from members of the public regarding this issue, noting that there are former police officers who tried to re-apply for an ASG position, but their requests were denied due to their ‘so-called’ criminal records — that were not felonies, but misdemeanors.

Two former government employees with criminal records, i.e. misdemeanors only —  told Samoa News that they want to understand the right procedures for hiring people to the government. They were each convicted of misdemeanor charges, but when they re-applied for their positions, their applications were denied. As a result, they can’t believe  the new Administration employed two former directors with felony convictions.

Samoa News spoke to the DHR director, Lynn Pulou-Alaimalo last Friday regarding this issue and she promised that she would respond via email because the issue of hiring convicted felons is not true. She said that all ASG hiring has to go through the proper process.

The employee introduced herself as Liupapa Avauli, an administrator, saying that she was calling on behalf of the HR director.

“We received your inquiries regarding the hiring of the two employees and I’m calling to inform you that any media inquiries regarding ASG employees must go through under the Communication Public Relation Division at the Governor’s Office because they are the ones who deal with releasing out any information regarding issues like this,” Avauli told Samoa News.

Samoa News informed Avauli that per conversation with the HR director, she had promised she would respond via email.

However, Avauli explained they were advised that any other future media-public comments must go through the Communication Public Relations Division at the Governor’s office. She pointed out in that way, the Governor’s Chief of Staff will then communicate straight to them, and relate the inquiries to them or any other relevant departments within ASG.

“Is this the new procedure established with the purpose to protect information from going out to the public?” Samoa News asked.

Avauli replied, “I can’t respond to your question. Like I said, the Communication Division at the Governor’s office will answer that for you. And while you’re also questioning this new procedure in this new Administration, you now have the chance to ask the person in-charge about the main purpose of this new procedure.”

He further stated that this is very interesting and he reviewed the law to see the difference between a Governor’s appointee and a person who goes through the DHR hiring process. Mr. Sunia did not indicate if either men were appointees or hired through DHR procedures.

A government senior employee, who has over 30 years experience with the process within DHR, explained how backgrounds of criminal records were obtained by DHR.

The person said that the Department of Public Safety (DPS) and the court together with the employee's department informs DHR on matters related to those who have committed crimes and been found guilty under the law "so HR may take appropriate administrative proceedings."

In cases where civil or criminal charges were filed and resulted in subsequent convictions that occurred in the private sector or setting; it is the duty of each ASG Department Head to report such matters to DHR.

Unlike when each person applies for a job, HR requests the Office of Homeland Security for a background investigation to be conducted. And, when HR receives information that the applicant has a criminal record, both the individual and the department are notified and proper actions are taken accordingly.

The source further noted that in cases where an ASG employee committed a violation and was subsequently criminally charged, that person is eligible and shall be afforded due process — to which they are entitled —  and leave with pay unless administrative proceedings where demotion, suspension or termination happen simultaneously as a result of the criminal charges.

“Under ASCA Title VII, Chapter 08, Section 7.0801 “employees in the career service may be demoted, suspended, or removed for below standard job performance, misconduct on the job, misconduct off the job which reflects adversely on the government, conviction of a felony, sentence to prison for 30 days or more upon conviction of a crime, or violation of standards established administratively which govern employee conduct and deportment, including but not limited to, the proper use and penalty for misuse of government property.”

It is very clear that those in the career service (or contract for that matter) may be demoted, suspended or removed for:

1 Substandard or below standard job performance

2 Misconduct on the job

3 Misconduct off the job, which reflects adversely on the government

4 Conviction of a felony

A former Director of the American Samoa Department of Education (ASDOE), Kerisano Sili Sataua was convicted in federal court of one count of conspiring to commit bribery and fraud concerning federal programs, in violation of 18 U.S.C. § 371.

He was sentenced to 30 months in federal prison and to pay $61,000 restitution to ASG.

The charges against Sataua stem from his use of his official position to fraudulently award federally-funded ASDOE contracts in exchange for at least $9,000. Further, Sataua stole and misappropriated food and goods from the School Lunch Program that were supposed to have been used for feeding children in the American Samoa Public School System.

The former Director of the American Samoa Department of Health and Social Services (DHSS), was sentenced to 15 months in federal prison and to pay $41,000 restitution to ASG after being convicted of one count of conspiring to commit bribery and fraud concerning federal programs, in violation of 18 U.S.C. § 371.

The charges against Mageo stem from his role in a conspiracy to fraudulently award DHSS contracts. Mageo admitted that he defrauded the DHSS of at least $40,000 by fraudulently awarding several federally-funded construction contracts for the Women, Infants and Children government building and other contracts for DHSS. Mageo further admitted that he used his official position as Director to approve the fraudulent award of other federally-funded contracts in exchange for at least $10,000.

At the time, the Assistant Attorney General Alice S. Fisher of the Criminal Division said of both men, “No public official is above the law … This case demonstrates the Department's determination to wipe out public corruption, and the great distance we will go to prosecute offenders in all states and U.S. Territories.”

It is unknown at this time that since both men were convicted in federal court, not local court, if a pardon can only come from the federal justice system or President of the United States, not the Governor of American Samoa.