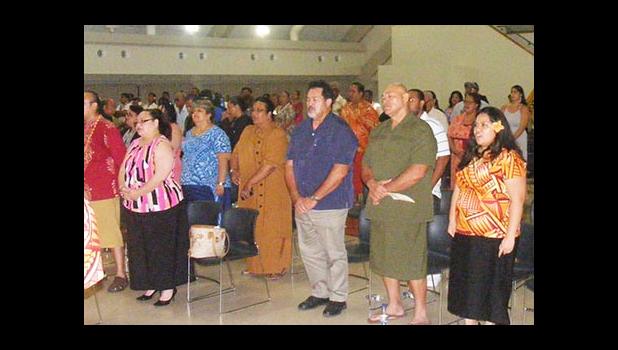 During the recent American Samoa Bar Association gubernatorial forum, candidate for governor Tuika Tuika didn’t mince any words to the question about the spread of illegal drugs in the territory, alleging that most of the people who are enforcing the law “are also involved in drugs.”

However, candidate for governor, Faoa Aitofele Sunia says he has never seen an illegal drug so he couldn’t give a response to the issue.

The question posed to the candidates for governor was: “According to the Police Commissioner the illegal drug problem is widespread. What do you believe is the biggest obstacle facing American Samoa in this battle? And also would you support drug testing for all government workers and elected officials?”

Responding to the second part of the on drug testing, Tuika said, “there would be no government workers if we test them for drugs” and the response prompted laughter from the audience. “I believe it’s the right thing to do is test them, each and every government worker to protect the public,” he added.

As to the first part of the question, Tuika’s response was blunt, “I believe a lot of people know that people who are enforcing the law, most of them, are also involved in drugs.” And the response prompted a much louder round of laugher from the audience as Tuika told a short-story to illustrate his point.

“I called police one time to come up and go up to the top of my mountain, there’s a marijuana plantation up there,” Tuika said. “By the time they get up there, the house that was up there was remove and no plants left.” The story resulted in more laughter from the audience.

“Maybe the police department, police who were involved, called up the people to go remove it,” Tuika alleges to more laughter from the crowd. “So you don’t trust anybody. The big problem is corrupt people enforcing the law. That’s why it’s important we test everybody, before they’re hired [by the government].”

Faoa started his response with the second part of the question saying that that he would support drug testing for all government workers and elected officials.

“And I think it’s something good, because the United States is doing it and I foresee that one of these days the [federal] grantors would probably require us to have the employees, who are paid with their money, be [drug] tested,” he said. “So what they’re doing in the states is going to trickle down here.”

As to the first part of the question, Faoa said he commends and appreciates efforts by the Police Commissioner and police in trying to battle the drug problem. Faoa also said that “the first part [of the question] I really don’t know. To be honest with you, I’ve never seen a drug, I don’t know what it looks like. Unlike beer and cigarettes I’ve tried and I know what they look like. So it will be very difficult for me to tell you how to handle that problem, or how to fight that problem.”

“But I give my trust to the [police] commissioner and the police, they’re doing their best and I fully support them. Continue to do what you’re doing and if you need more help, call the governor’s office,” he said.

Gov. Lolo Matalasi Moliga, who is seeking re-election, first responded to the second part of the question saying that “we fully support that concept” of drug testing.

Regarding the illegal drug issue, Lolo says the “biggest obstacle that we are facing from day one [of his administration], even up to today, is the lack of understanding of our people as to how big this problem is in American Samoa.”

“After observing this big problem… we are facing, what we are trying to do now is to appoint a task force that will look into the problem and recommend solutions to this administration as how we can best deal with the drug problem in American Samoa,” Lolo said.

“We’re trying to figure out, whether the problem comes from outside, or it's within us. That’s the knowledge we are trying to gain before we can even address and find a better solution,” he said. “First thing that we have to do, educate our children, as to the impact of drugs in their lives. Churches should play a major role in doing that as well as our community.”