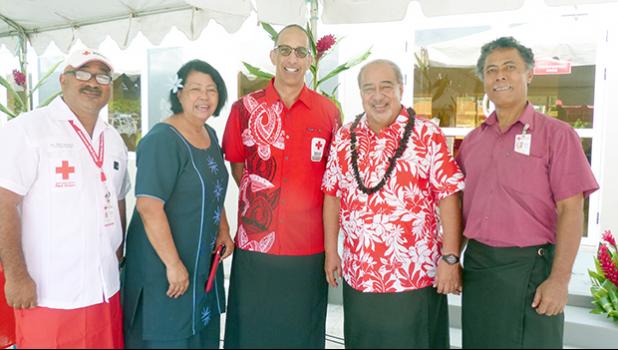 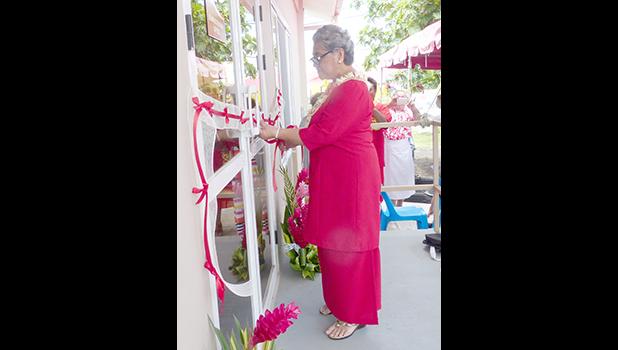 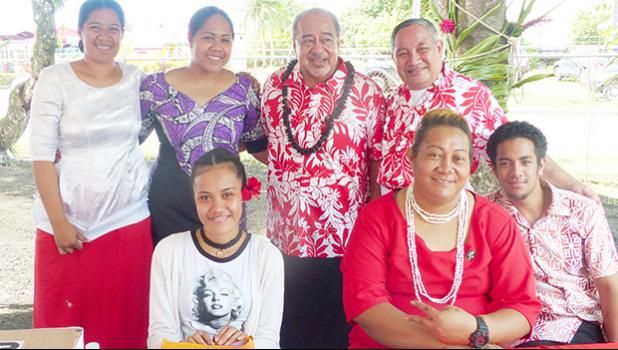 The building: a “manifestation of the spirit of philanthropy, generosity and compassion”
By
Samoa News staff
reporters@samoanews.com

The new building for the Red Cross of American Samoa provides a space that can be converted into disaster mode when the non-profit group activates a response to a disaster.

Launching construction of the one-story facility at its location in Tafuna was the vision of former local Red Cross chairman Gov. Lolo Matalasi Moliga, whose “courage and faith in our capacity rallied support from the community,” current chairman Vaito’a Hans Langkilde said in a prepared speech for yesterday’s dedication ceremony.

Vaito’a said there were many donations that came in for the project — from individuals, churches, businesses, and the American Samoa Government, supplementing the $35,000 contribution from Red Cross Chapter of San Diego, which oversees American Samoa.

He said the Red Cross building is the “manifestation of the spirit of philanthropy, generosity and compassion.”

Vaito’a acknowledged with appreciation the Church of Jesus Christ of the Latter Day Saints, the Pago Central Stake, led by President Starlight Lotulelei for volunteer skills and labor.  For the duration of the entire project, he further “acknowledged with great appreciation” the owner and workers of Pacific Refrigeration & Air Conditioning for the free labor for the construction work associated with the building.

Red Cross San Diego provided furniture and fixtures free of charge for the entire building along with the provision of two computers and defrayed expenditures connected with making the building Internet and wi-fi friendly.

“Red Cross’s success in the devolution of its mandate is the strength and commitment of its staff and Volunteer Network,” said Vaito’a, who acknowledged the support of the local Red Cross board of directors “for their sense of sacrifice and sense of giving for the time dedicated to the affairs and activities of the Red Cross is free.”

In his prepared speech, Lolo, who is the local Red Cross honorary chairman, said the new building “manifests our continued commitment to sustain the mission and vision of the American Red Cross to provide services to disaster victims in a non-discriminatory manner while safeguarding their human dignity.”

“It perpetrates Red Cross’s mission of instilling hope for disaster victims of man-made and natural disasters,” he said, adding that for 94 years since its establishment in American Samoa, the American Red Cross conducted its business and provided services from many different locations and makeshift offices.

“With our isolation from sources of aid, it behooves us to build our self-reliant capacity which necessitates the construction of appropriate facilities from which to orchestrate Red Cross services to the people of American Samoa,” he said and noted that the idea for a new building was launched in 2011.

While Red Cross is not a government agency, Lolo says it’s an essential part of the disaster response plans when disaster strikes. “Red Cross is very sensitive to its relationship with the government as independence is one of its fundamental principles,” he said. “Given the importance of Red Cross in its cadre of services to disaster victims maintaining an arm’s length association with the American Samoa Government is necessary.”

Details of the new building, provided by Vaito’a, states that 50% of the building is for administration operations, while the other half of the 82-feet wide building is allocated for multi-purpose functions: during non-disaster mode, the 1,000 sq. ft. open space will be utilized for volunteer training, and conducting Health & Safety Classes for certification of individuals in the community. The space can also be utilized for meetings, and conferences to generate revenues to defray operational costs for the facility.

During disaster time mode, the same space can be setup to be converted on a moments notice to a Red Cross Disaster Center allowing staff and volunteers both at the local and National level to respond more efficiently to assist victims of the disaster and to collaborate with the local government and National Red Cross and other off island Federal and NGO partners.

According to Vaito’a, power supply of the new facility and warehouse has been setup to allow for the immediate utilization of a temporary power source — portable generator — to power both structures in the event that the local utility’s power supply is taken out by a natural disaster such as a hurricane.

The facility was designed and built to be in compliant with federal American Disability Act.

Additional reinforcement has been put into the roof framing as well as other appropriate framework to allow for future installation of solar panels for electricity collection and water heating when these items become available.

With the new facility, Vaito’a said the local Red Cross would now be in a position to deliver the services to the community more efficiently and much faster than before. “In other words, the level of service will now be compatible to the level in the US mainland as long as the staff and volunteers are continually trained to keep up with the changes in the Red Cross organization,” he said.