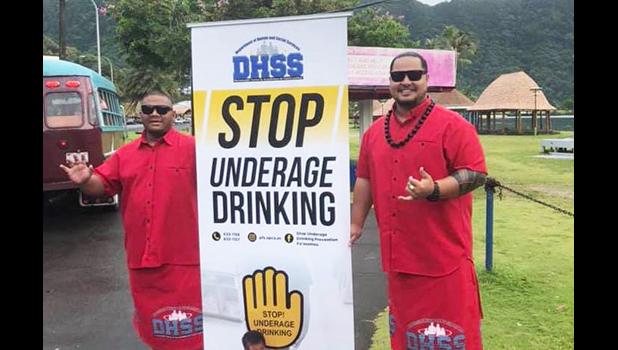 Pago Pago, AMERICAN SAMOA — Employees of the Department of Human and Social Services (DHSS) lined the streets in front of the DHSS headquarters in Utulei yesterday morning, for a special “wave” to culminate Red Ribbon Week 2019 in American Samoa.

The Red Ribbon campaign is a national initiative to stop drug use in communities. And Red Ribbon Week is the nation’s largest - and oldest - drug prevention campaign, reaching over 80 million people each year throughout the United States alone, according to redribbon.org

Locally, DHSS has consistently been at the forefront of substance abuse prevention efforts.

Those who took to the streets yesterday were all dressed in red, of course, and included employees of the DHSS Child Care team; Special Projects and Community Assistance (SPCA); the DHSS Director's Office; as well as the Women, Infant, and Children (ASWIC) crew, and other DHSS divisions.

“In response to the murder of DEA Agent Enrique Camarena, angered parents and youth in communities across the country began wearing Red Ribbons as a symbol of their commitment to raise awareness of the killing and destruction caused by drugs in America.

“In 1988, the National Family Partnership (NFP) sponsored the first National Red Ribbon Celebration. Today, the Red Ribbon serves as a catalyst to mobilize communities to educate youth and encourage participation in drug prevention activities,” according to redribbon.org