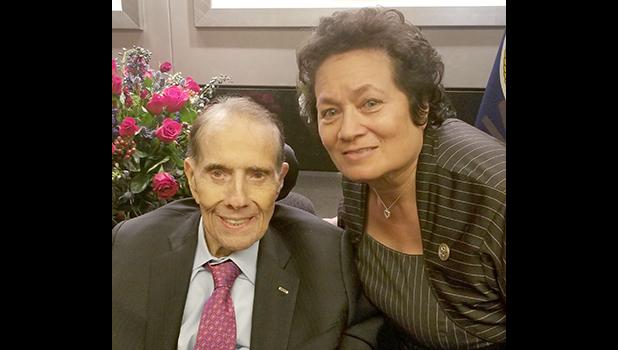 “Senator Bob Dole led a life of great service to the United States that extended over many decades. He served heroically in World War II, serving in combat in the U.S. Army as an officer from 1942-1948. He was hospitalized for many months with severe war injuries, earning the Bronze Star, and twice the Purple Heart. He was recognized for valor in attempting to rescue a fellow soldier.

“He went on to be among the most influential leaders to ever serve in Congress, serving in the House of Representatives beginning in 1961, then as the U.S. Senator from Kansas from 1969-1996. He rose to the Senate’s highest leadership role as Majority Leader, and also led for many years as Minority Leader. He was chosen by the Republican Party as their nominee for Vice President in 1976, and was the Republican standard bearer as the nominee for President in 1996. In 2018, Congress recognized him with the Congressional Medal of Honor, the highest national honor Congress can give. He previously received the Presidential Medal of Freedom.

“Following his retirement, he and his wife Elizabeth Dole continued to contribute to better lives through numerous charitable activities. Notably, in retirement, he was active in Veterans’ causes and greeted honor flights for Veterans to see Washington, D.C., especially the World War II Memorial. He was described as a man of strong private faith, and always known for a quick wit and sense of humor. I extend condolences to his family, and the millions of Americans who will be honoring his life and mourning his passing.”