Rep. Andra Samoa uses her Fono allowance to give back to her county 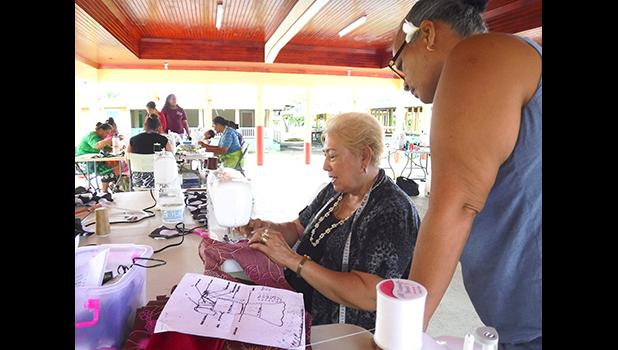 Diana Tarrant, who is in charge of the Consumer Science Program (CSP), and her assistant travel to outer villages — such as Leone — where village organizations and church groups have committed to locating a guesthouse or hall to use, with power, water, tables/ chairs and restroom, according to Rep. Samoa.

The latest Leone sewing class ran from Jan. 15th to May 22nd. It was held once a week from 9 am to noon, with the official graduation set for today, for the 17 participants — 15 females and two males.

Participants ranged from 19 to 70 years of age and the program was open to both men and women.

Samoa News learned back in January, days after Rep. Samoa was sworn into office on Jan. 3rd, that she planned to utilize her office expense account — which is tax free unless the lawmaker claims it as salary — for the sewing class.

Asked why she decided to use her lawmaker expense account, which is to defray costs for lawmakers during their tenure in office, to help the participants, Rep. Samoa said, “Because I believe Leone village residents deserve the $30,000 office allowance expense more than I do.”

She said she has been waiting for a chance to fund programs like the sewing class back in 2014 when the ASCC Land Grant — through Diana Tarrant — approved a request to start their outreach in Leone. After 4 months of that class, “I felt bad that the graduates could not afford to purchase a sewing machine since they were unemployed and I did not have the budget or funding source to purchase sewing machines,” Rep. Samoa said.

“Now that I have this funding source to provide new sewing machines for each graduate, there is no excuse for the class graduates to say, they cannot sew or seek entrepreneur opportunities,” she said. “They now know that they can save by sewing their own dresses, their children's clothes and school/ church uniform and family members' clothes for various occasions.”

She said the sewing class graduates “have learned a skill free of charge” from a federal program through its local agency for four months and that they now have a tool — the sewing machine.

She added that the office allowance fund could be well invested in such programs — to build local capacity and empower people in the village.

Asked what she hopes to achieve through this sewing program, Rep. Samoa said that after graduating from class after 4 months, “each of the graduates can use their new sewing machine to perfect their new learned skill.”

“Practice makes perfect and it's critical to have a sewing machine of your own instead of borrowing others',” she explained. “They can also learn how to fix their own sewing machine. I hope that they continue to sew and realize the savings in addition to making money from selling and promoting their end product — e.g. pillow cases, clothes, tablecloth, etc.”

“It would be great to also assist them in marketing their products and work together to form a cooperative so they can take orders from various churches and organizations locally and internationally,” she said.

Furthermore, “There is so much unintended consequences and opportunities that we can assist with, especially having the internet available for the ladies to learn more varieties of techniques in sewing.”

Aside from purchasing sewing machines for each participant, Rep. Samoa — through her office expense — also paid for the electricity and water on a monthly basis, purchased tables and chairs, and provided daily drinks and snacks. Occasionally, the participants would contribute snacks.

“I would not have been able to provide all this without my village electing me to be their representative,” which in turn provided the “funding from the allowance expense, as I had promised to give back to the village. I believe this is a great investment,” she said.

According to the Leone lawmaker, she will be launching soon, a Saturday sewing program for those who wished to attend but could not, due to the time the program was offered from 7:30 am to 4pm, during the week.