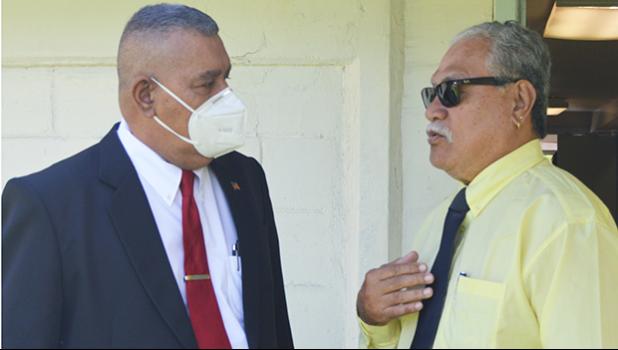 Vice Speaker says it’s a matter the two faipule should discuss outside of chamber
By
Ausage Fausia
ausage@samoanews.com

Pago Pago, AMERICAN SAMOA — Aua Representative Faimealelei Anthony Fu’e Allen has demanded a “public apology” over the “untrue remarks” made against him by a fellow colleague, which affected not only him, but also his wife and children.

Faimealelei did not mention the name of the fellow colleague to whom he was referring, however, the issue was first brought up by Pago Pago Representative Vesiai Poyer Samuelu, who said an eyewitness saw Faimealelei in Fagatogo, when he was required to be in quarantine at the Tradewinds Hotel.

Faimealelei was back in the House Chamber this past Monday after completing his 14-day quarantine period last Friday.

The lawmaker who returned to the territory on July 17 on a FEMA flight after medical treatment under a VA referral to Hawaii, expressed his disappointment about statements made in the House chamber which he said were untrue.

He stated he was taking other action in relation to the statements but felt strongly that the House leadership should carry out an investigation and take appropriate action for the untrue statements that were brought in the chamber against him.

“The remarks against me are not true,” Faimealelei said with a loud voice, adding that he’s waiting for and will accept the outcome of an investigation.

Faimealelei quoted the Samoan proverb “Aua le amanaia le pola motu mai tua,” which means don’t listen to rumors or unsubstantiated statements, but said if the statements had been made outside of the House chamber he would not raise the issue. However he wants to protect his name and also the integrity of the House.

Faimealelei said he has served for many years and has poured his foresight and wisdom into House deliberations for the good of Tutuila and Manu’a, so he is not taking this matter lightly.

“I’m not a small person, I’m a big man. I was already ordained by the oil of the Holy Spirit,” he declared with both his hands raised up to illustrate his statement.

Vice Speaker Fetu Fetui apologized to Faimealelei and urged that they discuss the matter in their meeting house which would be an opportunity for he and the faipule, who raised the issue, to make amends. He further stated that the media is present and he already voiced his denial of the matter last week.

The senior lawmaker did not end his remarks on the issue. He said whenever someone rises to the top others will try to bring them down. He further stated that the reason why these untrue remarks were made against him was because people hate him for what he has done and accomplished.

Faimealelei called out the faipule who made the “untrue remarks” — which he said have affected him, his wife, children and including his district.

Fetui Jr interrupted again and told Faimealelei the good thing to the honorable representatives is that he’s back and he’s in good spirits. He said he’s not going to instruct any faipule on what to do, but he wanted him and the Maoputasi faipule to find a chance to discuss this matter — just the two of them.

“We were selected by our constituents to protect our people from any harm,” Vesiai said, adding that he also respected the Fono and wanted to protect the integrity of the House.

“However, when it comes to the truth, I will never be silent but to reveal the truth because that’s our calling from God,” Vesiai said.

He further explained that he will not hesitate to bring up actions or behavior of lawmakers that put the health and welfare of the public at risk.

He said when he received a report from a witness about Faimealelei’s sighting he brought it up in the chamber because it affected the lives of the public. The Pago Pago faipule was about to give more details when the Vice Speaker interrupted him and brought the discussion to a close.

Fetui Jr then advised Faimealelei to not let the devil and his temptation to destroy his good character. He said we have 4 more months away before the election and they have to get ready and prepare for the challenge.

Following the session, Samoa News saw Faimealelei and Vesiai having a discussion outside of the House building; and at the end of their discussion, they shook hands.

The subject about Faimealelei being seen in Fagatogo by a witness was first brought up in during the House session 2 weeks ago. Vesiai informed the House that an eyewitness had seen Faimealelei in Fagatogo on Tuesday morning.

According to Vesiai, the witness confronted Faimealelei and told him that he should never leave his room. Vesiai told the House that the eyewitness was quite upset with Faimealelei.

The Pago Pago faipule said that he’s not questioning the Faipule’s action but he is questioning the Coronavirus Task Force Committee about corruption within their operation. He said the reason why he’s bringing the matter up is to illustrate what is really happening and the lapse in the enforcement of protective measures.

“They assured us during our hearing yesterday morning (last Tuesday morning) that Faimealelei and his wife are both secure inside their room and no one is allowed to leave the room until their 14-day quarantined is over. And now, let us see what is happening now,” Vesiai told the House.

Vesiai advised the House that they need to look at this issue very seriously instead of depending on the word of the Task Force.

Vesiai was vocal during earlier hearing with DOH and LBJ officials 2 weeks ago concerning the FEMA agent that was refused entry while Rep Faimealelei and his wife, the only other passengers on the same flight from Honolulu, were taken to the hotel to be quarantined.

The FEMA official had received a positive COVID-19 test on June 29 but was negative in a test on July 15, two days before she arrived here.

Vesiai said his children had booked a room at the Tradewinds Hotel over the previous weekend and he only found out on that Sunday about travelers being quarantined there. He said the hotel is where the community gathers for celebrations like birthdays, weddings and to socialize.

There’s no guarantee that the faipule and his wife were not exposed to the virus during the flight with the FEMA agent, he insisted. Vesiai said he was concerned for the health of his children, patrons of the hotel as well as its employees.

Last week’s Monday, Fetui Jr told the chamber during the House session that Faimealelei has strongly denied the allegations against him.

Fetui Jr said that according to Faimealelei, there was no time that he ever left his hotel room since he and his wife have been under quarantine. He also told the chamber that he’s not sure whether the allegation brought against Faimealelei is true or not, but only God knows what really happened.