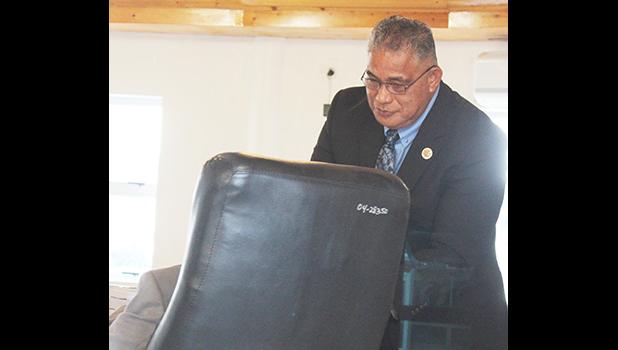 During the 40-minute hearing, Sen. Tuiagamoa Tavai sought an update on the repatriation flight on which Motusa shared that the 166 passengers for the flight started their required 10-quarantine in Honolulu on Monday this week.

And of the total passengers, five of them — four of which arrived in Hawaii from the US mainland — tested positive of COVID-19. These five individuals — who have now been taken off the repatriation flight — are now under special care quarantine by health and medical officials in Hawaii.

Motusa said the 161 passengers for the repatriation flight will undergo two more tests before they depart Honolulu and the quarantine period is extended to 12-days — which means that the flight, initially set to depart Jan. 29th is moved two days later to Feb. 1st — to arrive in the Territory between 12-noon and 1p.m.

From the airport, the travelers will be taken directly to the Tradewinds Hotel where they will go through the first test here to start a required 14-day quarantine period.

With the revelation of COVID-19 positive tests, committee chairman, Sen. Satele Galu Satele Sr., who had previous voiced concerns over the flights, said that all of the task force preparations will be for “nothing” if the virus ends up entering the territory because the government has allowed a repatriation flight.

He said that one virus infection on island, means the virus will quickly spread affecting American Samoa’s small population. He also says that it’s the Senate’s hope and wish that the government delay the repatriation flights until the situation is stable in the US as more people are testing positive and more lives are being claimed by the deadly pandemic.

Another issue mentioned during the hearing is the COVID-19 vaccination, which is ongoing. According to the latest DoH bulletin, eligible groups for vaccination today, Friday, at DoH’s location at Tafuna are those 16 years and older, with “underlying medical conditions which increase the risk of serious, life-threatening complications from COVID-19.”

Also for vaccination today are “other essential workers”, such as people who work in transportation and logistics, food service, housing construction and finance, information technology, communication, energy, law, media, education.

During the confirmation hearing, Motusa was praised by senators for his 8-years as DoH director in the previous administration, and his contribution to the health and safety of the territory through his work with medical staff.

It was clear from many senators who spoke during the hearing that they fully support his nomination to serve in the post for the next four years under the Lemanu Administration.