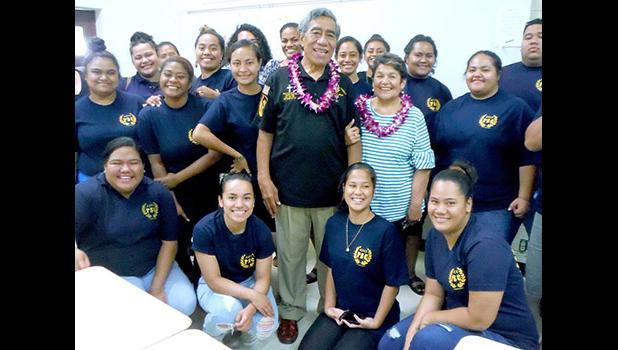 Pago Pago, AMERICAN SAMOA — On Thursday, October 25, the American Samoa Community College (ASCC) Political Science Club welcomed Bishop Vaifanua Mulitauaopele of the American Samoa Republican Party as their guest speaker. Accompanied by his wife Eva, Bishop Mulitauaopele spoke to the club members about the ideology of the Republican Party and his personal journey to becoming a member.

A son of American Samoa, Mulitauaopele graduated from Samoana High School and went on to serve in the US Army during the Vietnam War. He later settled in South Carolina, where he became a successful businessman and also entered the ministry. Through his work with Mission of Hope Ministries, Bishop Mulitauaopele has been returning home to visit the Territory for over 20 years. Mission of Hope has established 23 health centers across the United States, and, thanks to a longstanding effort on the Bishop’s part, is in currently the process of establishing a health center in American Samoa which will hopefully open its doors next year.

Mulitauaopele told the ASCC Political Science Club that he chose the Republican Party because its principles aligned closely with his spiritual beliefs. He favored the Republican ideals of smaller government, lower taxes, family values and military preparedness, among other tenets. He encouraged the club members to take a greater interest in politics, which he referred to as “a contest of ideas,” regardless of whether their party preference is either Republican or Democrat. “Some people prefer to live under the table,” he said, “but I think you’ll find it far more satisfying to put your beliefs into action to help shape your own future.”

At ASCC, the Political Science Program falls under the auspices of the Social Science Department. The Political Science Club provides a gathering place for students interested in learning as much as they can about government and society. The club hears from guest speakers at various points throughout any given semester, and also engages in civic projects that benefit worthy causes and foster good citizenship.  “One of the stated Learning Outcomes in the Political Science program is that students are able to analyze and apply classic and contemporary theories, concepts, models, norms, ideas and events in Social Science disciplines,” explained instructor and club advisor Adrian Moana. “A figure such as Bishop Mulitauaopele holds strong political beliefs, and at the same time works tirelessly on projects that will benefit everyone, so he made quite an interesting guest speaker for our club.”