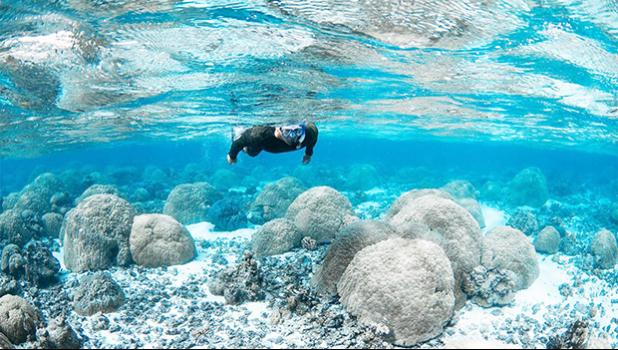 Pago Pago, AMERICAN SAMOA — Gov. Lemanu Peleti Mauga's declaration that Manu’a’s marine and rainforest resources be developed has inspired a flurry of private sector economic development. At the heart of the development is the evidentiary research of Dr. Peter Craig of the National Park Service and Dr. Steve Palumbi, a leading marine biologist from Stanford University.

They discovered that coral reefs along Ofu’s Toaga coast were resilient to temperature fluctuations that bleached reefs in Australia, Caribbean and Florida’s coastal waters. According to John Wasko who is leading the economic development effort, the economic implication is clear; if American Samoa’s coral reefs are resilient do they offer solutions for coral reefs dying elsewhere in the world?

Luck perhaps, or divine providence, ASTCA’s BLAST fiber optic lines are directly adjacent to the Toaga coast. Mobile sensors placed on the reef and in the rainforest can provide real time biodata to researchers around the world. And for venture capitalists that means a scalable source of data that can be shared and sold to global colleges, universities, research institutes and corporations.

For the families of Manu’a that data means that students would visit Manu’a to learn computational genomics, marine science, rainforest ecology and ethnobotany. In monetary terms it means rental income, food service and access fees to customary land for Manu’a families

But according to Wasko several pieces need to fall in line. First and foremost investors must be willing to put up between $5 to $15 million to build the lodging and research facility. ASG should be a willing partner in a public/private investment plan and the high chiefs of Manu’a should form a coalition similar to the development of the National Park.