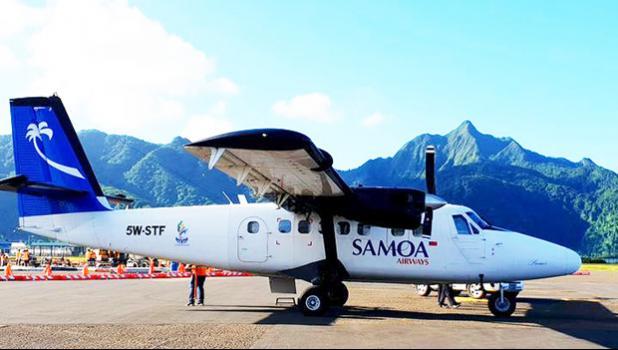 Pago Pago, AMERICAN SAMOA — Samoa government owned Samoa Airways has stationed one of its Twin-Otter aircraft in American Samoa to ensure continued air service to the Manu’a island group during the time frame when Samoa’s borders are closed to combat the coronavirus pandemic.

Samoa Airways operates the territory’s domestic flights under a cabotage waiver from the US Transportation Department and air service is needed at this time when the two ASG vessels are down for maintenance and service.

However, when the Samoa government closed its borders last Friday (American Samoa time), it abruptly halted Manu’a flights, since the aircraft comes from Apia on the inter Samoa route. Following the halt, Manu’a residents took to social media with their concerns and questioned what ASG will do now.

During Monday’s cabinet meeting, Deputy Secretary of Samoan Affairs Malemo Tausaga said that alia boats are now sailing between Manu’a and Tutuila with no air service and he is concerned with the safety of people onboard.

Gov. Lolo Matalasi Moliga, who participated in the meeting via teleconferencing, said a request had been made to Samoa Airways for an aircraft to be based at the Pago Pago International Airport for Manu’a flights, under an agreement of $4,000 a week.

The governor’s chief of staff, Fiu J. Saelua said Samoa Airways management has agreed to base an aircraft in Pago Pago.

Responding to media inquiries, ASG’s COVID-19 Task Force chairman, Iulogologo Joseph Pereira said yesterday that the aircraft is now parked at the airport with the pilots and engineers staying here throughout the duration of Samoa's lockdown.

He explained that Samoa Airways’ operated flights on Wednesday this week to fulfill the airline’s obligations to Manu’a residents who had paid their airfares before the coronavirus interruptions.

According to the task force chairman, Manu’a charter flights started yesterday and it will follow the usual flight schedule relative to flights to Ta'u and flights to Ofu.

“The passengers to Manu'a will pay for their own passage and the government will collect the fares,” he said, adding that one flight each for Ofu and Ta’u were scheduled for yesterday and today, but additional flights will be determined based on the need.

Regular flights — which are considered charters — will begin next week with flights on Monday, Wednesday and Friday to Ta’u island while Tuesday and Thursday to Ofu island. A Saturday flight is predicted on demand.

As to the cost under the agreement to ASG, Iulogologo said the cost to park the plane here for charters is $4,000 while the cost of charters to Manu'a is $3,000.

During the cabinet meeting, the governor directed Budget Office and the Treasurer to identify money and issue payment to the airline so that air service will resume for Manu’a as soon as possible.