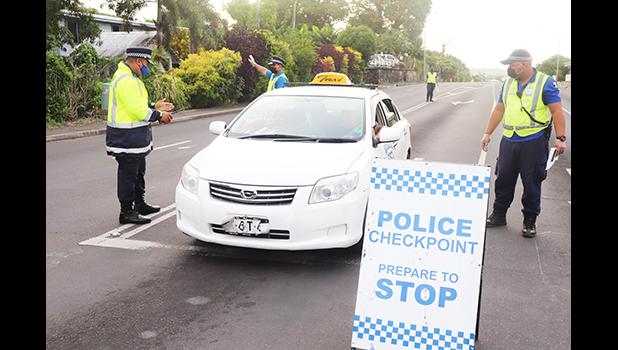 Pago Pago, AMERICAN SAMOA — The 48-hour lockdown in Samoa has now been extended for another 72 hours — til 6p.m, Thursday Jan. 27 in Apia (Wednesday in American Samoa) —  after 5 frontline workers tested COVID-19 positive.

Fiame made the announcement Monday night in Apia (Sunday in American Samoa) after her Cabinet was informed earlier in the day about the frontline workers testing positive as they provide care for the 15 passengers on board a flight from Australia last week that tested positive after arrival in the independent state.

She said that there has been no evidence of a community transition of the coronavirus.

The extended lock down quickly spread on social media as residents in both Samoas posted updates online.

Meanwhile, some restrictions have been eased  temporarily for businesses to open Tuesday in Apia such as banks, money transfer services, gas stations and shops.

During Fiame’s televised news conference, held late Saturday morning in Apia — Friday in American Samoa, first announcing the 48-hour lockdown, she pointed out that the 15 cases are a ”significant number of cases for Samoa, given the vigilance that we have managed, [with] health border security.

She noted that “despite all the 15-cases being in quarantine, Cabinet has decided to exercise and impose measures that will further enhance the security and protection of everyone from the virus and to ensure the risk of a likely community transmission is minimized to the extent possible.”

She also said that Cabinet has considered and approved the elevation of Samoa’s alert level to “Level Three — Red or High Risk”. She then declared the “nation-wide lock down” which she says would require everyone to remain at home except for authorized essential workers, who will continue to provide crucial and necessary services to the country.

Additionally, only authorized vehicles were allowed on the road during the lock down period. And all other activities — work, school, travel, restaurants, buses and churches — would be closed.

“Cabinet will carefully monitor developments during the lock down and make necessary amendments depending on the situation at hand,” the Prime Minister said, noting that police continue to maintain law and order.

“Under the current circumstances, the measures outlined are not intended to cause panic but simply encourage caution, vigilance and enhance awareness of an evolving situation,” she said and called on the nation for their cooperation.

During the lock-down Samoa police posted updated notices on the government’s Facebook page, about enforcement, with various checkpoints and vehicle patrols around Apia and its peripheries as well as all over the country in ensuring compliance with country’s State of Emergency (SOE) orders issued by the Head of State.

By Monday morning in Apia, police announced that more than 50 warnings have been issued for breaches of SOE Orders since the start of the lockdown.

“We thank the Honorable Prime Minister for her statement... and assure her and the people of Samoa that they are all in our prayers as we face this pandemic together,” Lemanu said in a statement issued last Friday afternoon in Pago Pago. “We will support Samoa with their response to these recent developments as much as we can.”

According to the statement, the COVID-19 Task Force has taken these events from Apia into consideration and ask the people of American Samoa to remain calm, vigilant, and prayerful. And that the task force has decided to cancel flights between Pago Pago and Apia for one week, to support Samoa’s response efforts.

It also says that the task force will make an official announcement on resumption of Apia flight schedules as soon as official communications with the government of Samoa confirm that both Samoas are able to safely resume inter-island flights.

Samoa News will update this story online if and when new developments occur.

Earlier, the American Samoa COVID-19 Task Force had cancelled inter Samoa flights for one-week, in support of the Samoa government’s efforts after 15 passengers on board a flight from Brisbane, Australia tested COVID-19 positive and Samoa went into a lockdown.

Gov. Lemanu Peleti Palepoi Sialega Mauga offered words of “solidarity” after the announcement by Samoa Prime Minister, Fiame Naomi Mataafa, of the 48-hour nation-wide lock down this past weekend, that was set to end at 6p.m. yesterday — Monday in Samoa and has now been extended.

Samoa News understands that the task force’s decision followed a recommendation from the territory’s medical personnel that met Friday afternoon, after Fiame’s original announcement was made in a televised address to her nation and streamed on the Samoa government’s Facebook page and monitored locally — including at Samoa News — as well as by Samoans and non-Samoans residing overseas.

Samoa Ministry of Health released a statement on Sunday in Apia, saying that the 15 positive cases are closely monitored in isolation and are cared for. Additionally, all frontline workers who handled the flight from Australia tested negative and are now in quarantine for extra precautions.

“There are NO COMMUNITY cases identified so far.  We are all in this TOGETHER,” it says.

Fiame’s televised news conference held late Saturday morning in Apia — Friday in American Samoa — announced the original 48-hour lock down, after 15 passengers tested positive — including five positives identified that morning. And all travelers are in isolation.