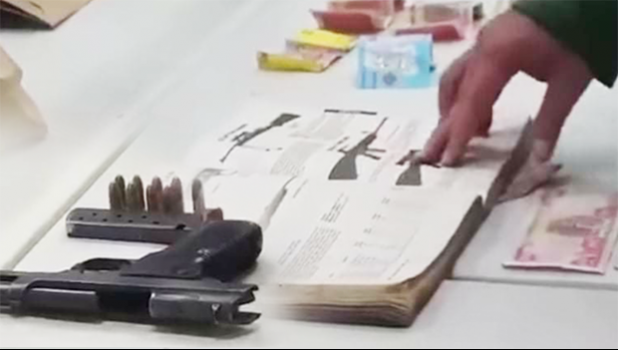 By
Ausage Fausia
ausage@samoanews.com
These are strong allegations and Samoa needs to provide proof because they’re making us look bad in the eyes of the world, the police official told Samoa News

Responding to these “strong suspicious and allegations,” one senior police official told Samoa News that the allegations by Samoa are based on “hearsay and assumption” while the other senior official stated they “have no solid proof” of the allegations.

“I strongly oppose the allegation made by the Samoa Prime Minister that these items were originally from our Territory. These are strong allegations and Samoa needs to provide proof because they’re making us look bad in the eyes of the world,” the police official — who declined to speak on record as he is not authorized to speak on the subject — told Samoa News.

During his weekly program with the Samoa Radio 2AP last week, Prime Minister Tuilaepa Lupesoliai Sailele Malielegaoi told the reporter that he suspects the currency and weapons made their way to Samoa from American Samoa.

He further stated that he believes the source is American Samoa soldiers who served in the military in Iraq. He also said that the only purpose for the illegal weapons found in this raid and others — is for the purpose of guarding hard drugs.

Speaking about the main reason why the Fagalii Airport was closed down by the government on Jan. 01, 2020, the Samoa PM said that Samoa suspected that the airport was the main entry permit for contraband such as drugs and weapons flowing into Samoa from American Samoa.

The Samoa PM then mentioned something about people who deal drugs in American Samoa are sending drugs to people in Samoa. He also said that some of the people he knows are involved in this type of business are “some car rental owners”.

The incident regarding the foreign currency and unusual weapons allegedly found in Samoa came to light when a group of Samoa’s elite police officers were involved in an operation at Faleatiu village that ended up with the arrest of two men from the same village.

A few moments after the operation, Samoa Police Commissioner Su’a Fuiavailiili Egon Keil during a press conference with the Samoa Media said this is the first time police have came across the Iraq dinar in Samoa. (The dinar is a form of Iraqi currency.)

He said Iraqi dinar notes of $25,000 (US$20) were also found on two different persons. Also confiscated during the police operation was a hardcover book with descriptions of various guns.

According to Samoa Police Commissioner, this is very suspicious, and although they don’t yet know the connection, the Samoa Police Service plans to utilize all its available resources and intel to investigate further regarding this matter.

Su’a told reporters in Samoa that their operation discovered not only weapons but also illegal substances that they had not come across before. Su’a said that these illegal substances he believe based on his preliminary investigation and experience resembles cocaine and it’s being used in Samoa.

Su’a said all the weapons found and confiscated were illegal and he suspects they could be entering Samoa hidden in containers of freight. However, there were weapons that Su’a says are unusual and they had not come across them before.

The two men arrested during the police operation are Iolamo Sanele, a.k.a Lamo Sanele, 30-years-old, and Fotu Sanele Ma’o, 34 years old. Both men are the nephews of notorious drug lord and double murderer Tagaloasa Filipaina, according to Su’a’s statement to reporters in Samoa.

Su’a told reporters in Samoa that police were responding to an incident where two men were firing guns within the village of Faleatiu over the past three weeks. As a result, two men were captured along with the confiscation of illegal substances, Iraqi currency and weapons.