Samoana graduates 190 — "…Those Who Believe in Beauty of Their Dreams!" 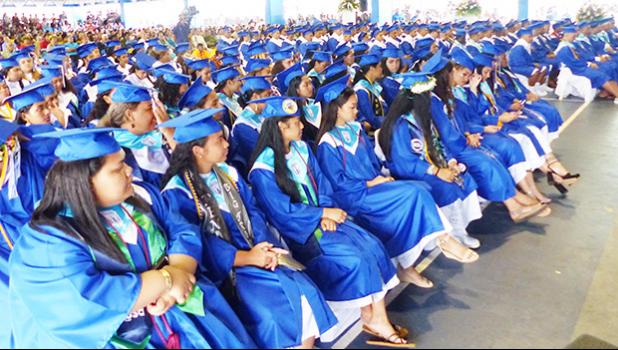 Pago Pago, AMERICAN SAMOA — Samoana High School graduated 190 students during a Commencement Ceremony held on Friday, June 11, 2021, at the SHS- Home of the Sharks gymnasium. Under the theme of “The future belongs to those who believe in the beauty of their dreams”, a quote from Eleanor Roosevelt, a former U.S First Lady, the graduates’ invocation was delivered by Rev. Patolo Mageo, with Gov. Lemanu Peleti Palepoi Sialega Mauga offering special remarks.

Samoana High School first opened its doors in 1946 as the High School of American Samoa, making it the first such school in the territory. Last month it celebrated its 75th Diamond Jubilee Anniversary with alumni coming together in a celebration that touted the school’s proud heritage of achievements reflected through its graduates — many having achieved their dreams, many living their dreams — with family & friends attending.

For Top of the Class- 2021 (5) Valedictorians share honors, while the Salutatorian award is shared by three (3).