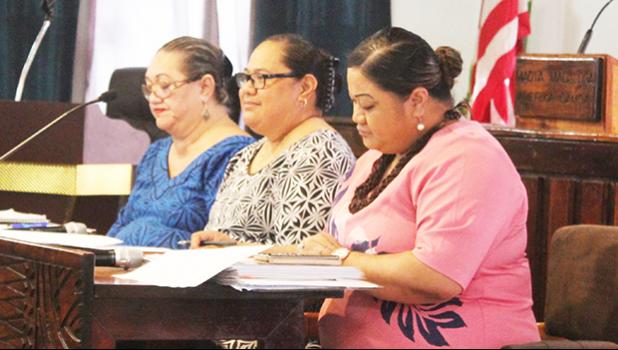 Also attending the hearing — which has since been postponed for a later time as the committee wants Education director Talauega Dr. Samasoni Asaeli to attend — were Office of Budget and Planning director, Catherine A. Saelua (left) and Human Resources director, Lynn Pulou-Alaimalo.

The acting director informed senators that Talauega was attending a personal family fa’alavelave, and therefore unable to be at the hearing. (Through a July 19th memorandum to cabinet members, Gov. Lemanu Palepoi Sialega Mauga said Talauega is on leave from July 19 - July 23, and appointed Salavea as acting director)

Committee vice chairman, Sen. Fai’ivae Iuli Godinet , who chaired the hearing, explained that the purpose of the bill is to repeal certain provisions of the law on teacher’s pay scale, but provided no other information on what the new pay scale would be.

At least two other senators agreed with Fai’ivae’s statement, saying that there should be additional information on what the new pay scale would be so that there is better understanding of what’s expected in the future.

Senate President Tuaolo Manaia Fruean said the Senate requested that the Education director attend the hearing to answer specific questions, while the directors of DHR and Budget Office were asked to be present as supporting government witnesses on the bill.

Tuaolo suggested to postpone the hearing to a future date, and that the Education director is present at that time. Fai’ivae, and other committee members, agreed, saying that the hearing will be rescheduled at a later time and that committee needs the director not deputy director to testify.

It’s unclear when a new hearing date will be scheduled at this point, as lawmakers will be starting on Wednesday, the review of the FY 2022 budget.

In submitting the bill to the Fono, the governor explained that the proposal would repeal current law relating to Teacher Pay Scales. He said the administration has adopted a new pay plan for teachers that was effective July 1st this year.

And the plan - established through the Administrative Rule process - along with the hike in minimum wages and other salary reclassification for career service employees, calls for starting salaries for teacher degree holders with an AA  degree at $20,635; BA at $31,560; MA at $41,074 and PhD at $50,233.