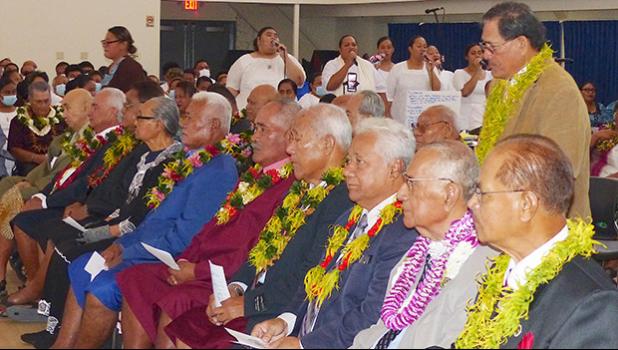 Prevention is better than the cure…
By
Fili Sagapolutele
fili@samoanews.com

This was one of the issues discussed yesterday during the Senate session, where Sen. Fai’ivae Iuli Godinet recalled that Gov. Lemanu Peleti Palepoi Sialega Mauga announced during his State of the Territory address on Monday to a joint Fono Session that repatriation flights would start on Jan. 29th.

Fai’ivae pointed out that just one person infected with the COVID-19 virus could have a serious impact on the rest of the territory and recommended calling a Senate hearing to get more information and an explanation from the task force on their preparations and plan.

Senate President Tuaolo Manaia Fruean referred the matter to Senate Hospital and Public Committee chairman Satele Galu Satele Sr., who pointed out that while the governor had spoken about the start of repatriation flights — this is a serious matter dealing with a deadly virus — and the Senate needs to look into it more closely.

Sen. Satele noted that CNN television network news is reporting daily the continued increase in the number of people in the US who have died from the virus — in the thousands — and those infected — in the millions.

He reminded his colleagues of the phrase, ‘prevention is better than the cure’, and agreed with Fai’ivae that one person infected with the virus in American Samoa would have a serious impact on the rest of the population.

Satele also said that “we all love our families” stranded off island but “we have to look carefully” if it’s appropriate at this time to being repatriation flights. He called on the Senate to protect our small island territory, saying that only one person infected could quickly spread.

Tuaolo said that in addition to the new task force, physicians should also be included in the hearing, which will be a committee-of-the whole — meaning all senators — because of the importance of this issue.

(In his response Monday to the governor’s speech about the repatriation flights, Tualolo reminded Lemanu to listen to advice from the doctors.)

Provisions of the new Senate rules of conducting business in the 37th Legislature states in part that “meetings or hearings of a Senate committee shall be called solely for the purpose of inquiry and determination of any matter referred to it by the Senate or its presiding officer.”