Senator asks about rumors of ‘new hires’ in gov’t 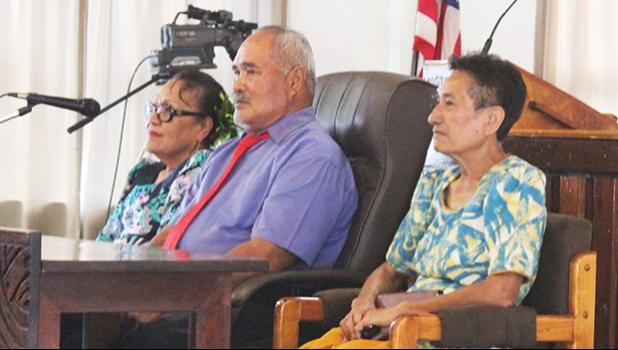 Responding to a question from Sen. Fonoti Ta’ifa Aufata, Malaepule said he doesn’t own a business, while the other two nominees told the committee that they owned businesses, with Vaitautolu’s business located in Manu’a.

While he acknowledged that his question is not related to the DBAS board nomination hearing, Sen. Sauitufuga P. Suiaunoa asked Liu if there were many recent hires in government, as there have been a lot of reports of new hiring in government.

Sen. Magalei Logovi’i, who chaired the Senate committee hearing, reminded his colleagues that the hearing is specific for board confirmation and requested that any un-related questions be asked during a separate committee hearing that can be called later, focusing on other issues.

Liu did give a brief reply to the question in which the DHR director confirmed that there have been “emergency” hires in connection with the coronavirus for several agencies, such as the Department of Public Safety.

Each of the new nominees will serve a two-year term. And in accordance with local law, only the Senate confirms members of the DBAS board.

The nominees will fill current vacancies after the Senate early this year rejected the re-nomination of board members Talalemotu Mauga and Vaiausia Yandall for another term.  The third vacancy was the result of the passing of Maugututi’a Leapei Fa’aola, who was re-nominated by the governor early this year but passed away before the Senate confirmation.

The confirmation vote came after a Senate committee hearing earlier yesterday where Sen. Fa’amausili Mau Mau Jr., called on the nominees to look at loan requests for home repairs from low-income families, which need help the most. He asked that the nominees do a good job.

Sen. Muagututi’a Tauoa pointed out that the nominees have served the government and the public for many years and their appointments as DBAS board members show that the governor continues to trust these officials.