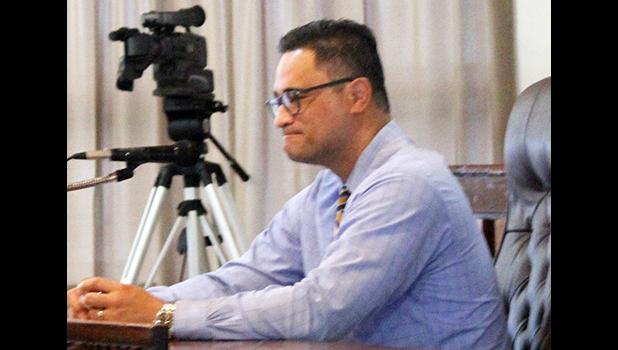 Senators were unanimous in voicing strong objections to any move through the federal court system to impose automatic US citizenship on persons born in American Samoa, arguing that the decision should be and must be made in American Samoa by everyone, and not just a few individuals living off island.

Waddoups’ Dec. 12 2019 decision, which he placed on hold the following day, was the result of a lawsuit filed last year by three American Samoans residing in Utah against the US State Department and other federal officials.

ASG AND CONGRESSWOMAN ARE INTERVENORS

Waddoups ruled that persons born in American Samoa are US citizens by virtue of the Citizenship Clause of the Fourteenth Amendment. (See Samoa News Dec. 13 and 16, 2019 editions for details.)

The Senate hearing garnered the first public reactions from senators since the case was filed in 2018. The case is identified in court records as “Fitisemanu vs United States”.
Tuiagamoa said he’s very saddened with the issue, adding that he doesn’t know where these individuals (using the Samoan word, tamaiti) come from, as there is no “Fitisemanu” chiefly title in Tutuila and Manu’a. He suspects this Fitisemanu surname originated from outside of American Samoa.

He said these individuals completely ignored the people of American Samoa — including the governor and leaders — in taking up the matter, which he says should originate from American Samoa and its people and not the plaintiffs, who are only representing their own interests.

Tuiagamoa contends that American Samoa’s congressional delegate is the proper channel to bring to the federal level the wishes of American Samoa and its people, but for a small number of people to file a case that will impact everyone in American Samoa is very saddening and disappointing.

“Ou te le iloa po’o fea e o mai ai gei kamaiki,” he said in Samoan, meaning I don’t know where these children (kids) come from. He said the plaintiffs don’t realize the major impact this will have on all of American Samoa, if the court ruling becomes final. He pointed to federal laws which give US nationals the chance to apply for citizenship if they choose to, but “not to force” all people of American Samoa to be US citizens.

Satele agreed with his colleague. He later told Samoa News that the plaintiffs don’t speak for all American Samoans. “O ai tagata nei?” — who are these people — referring to the plaintiffs.

He said a final court ruling will have a negative impact on the Samoan culture — lands, titles, and other treasures — and the plaintiffs lack respect and have no love (“leai se alofa”) for the rest of American Samoa in taking such action.

Sen. Fai’ivae Iuli Godinet said becoming a US citizens is “your own personal choice.”

Sen. Tuaolo Fruean suggested to Talauega to look again at the Deeds of Cession, which were the focus of the Honolulu federal court decision, agreeing to American Samoa’s case against the federal government over the reduction of the Large Vessel Prohibited Area (LVPA) in territorial waters. He asked the AG to inform the feds that the “Deeds of Cession is to protect us, not to own us.”

At least two other senators questioned where the plaintiffs were actually born. Court documents state that all three were born in American Samoa: John Fitisemanu in 1965; Pale Tuli  in 1993; and Rosavita Tuli in 1985.

Senators unanimously approved the House measure later during the session. Samoa News understands a copy will be forwarded to the US State Department and ASG legal team in Washington D.C., currently working on appealing the decision.