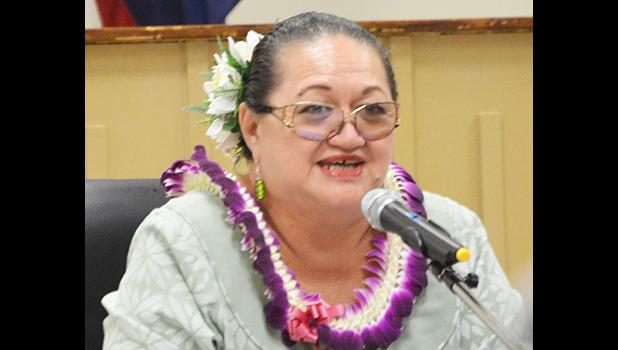 Legislators concerned they were not consulted on reprogramming funds
By
Fili Sagapolutele
fili@samoanews.com

And she also estimated that about $6.9 million to $7 million from local revenue would fund these salary increases for the new FY 2022 — which begins Oct. 1, 2021 — and future fiscal years. She also shared with senators a one-page summary of the ASG “budget v. expenditures” of the FY 2021 budget for local revenue as of June 30th.

The summary shows that $76.75 million is approved under the FY 2021 budget for the Executive Branch, while actual year-to-date expenditures — as of June 30th — totals more than $49.58 million.

It also shows that the “estimated cost threshold & years of service” — which includes the new salary increase —  totals more than $1.7 million. As of June 30th the summary shows nearly $10 million — or $9.99 million — is the estimated year end balance for FY 2021 for the Executive Branch.

Saelua explained that the executive branch had a big savings in FY 2021 under the travel budget due to the border closure when commercial flights were suspended since last year — and there were also many vacant positions for which no salaries were paid .

She had given a similar explanation on the first-day of the Fono Joint Budget hearing two weeks ago saying that the new salary increases are funded with unused local funds from the travel budget and vacant positions.

However, a major concern from lawmakers — in both the Senate and House — is that the Administration didn’t seek Fono authorization to re-program funds for salary increases. These are funds already approved in the FY 2021 budget for other uses.

And Sen. Malaepule Saite Moliga emphasized this point again during yesterday’s Senate committee hearing saying that any left over funds for a fiscal year are required — under law — to come back to the Fono for re-appropriation, and this includes salary increases that were not included in the approved FY 2021 budget.

The committee re-emphasized to Saelua — who was accompanied to the hearing by Attorney General Fainu’ulelei Falefatu Alailima-Utu, acting ASG Treasurer Levi Reese and Human Resources director, Lynn Pulou-Alaimalo — that the Fono supports the wage hikes but it should be done in accordance with the law dealing with the funding source.

Sen. Magalei Logovi’i who chaired the hearing requested the Treasury Department for documentation that would show the federal government approving the use of federal COVID-19 money to fund reclassification and new pay scales for degree holder-educators.

The Governor’s Office said last month — responding to media queries — that the US Department of Education (USDOE) had given approval for use of the COVID-19 Education Stabilization Fund (ESF II) to pay for salary adjustments for public school educators, while the local Education Department (ASDOE) already has a plan to cover the adjusted salaries when the grant money expires in about 3-years.  (See Samoa News online July 21st for details.)