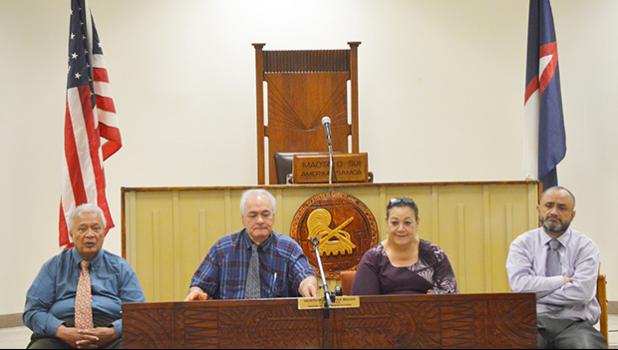 It was to allow voters stranded due to COVID-19 to vote absentee
By
Ausage Fausia
ausage@samoanews.com

Pago Pago, AMERICAN SAMOA — After House amendments to the Senate bill allowing registered voters stranded off-island due to COVID-19 to cast ballots in the November 3rd election were announced in the Senate chamber yesterday morning — the Senate unanimously rejected the House amendments, meaning the election law remains ‘as is’.

The Senate bill was passed by the House with amendments during the third reading last week.

In one of their amendments, the House removed a provision in the Senate bill concerning Emergency Authority for the Chief Election Officer.

The provision states that if a declared national or local emergency makes compliance with this title impossible or unreasonable, the Chief Election Officer is authorized to immediately prepare procedures to ensue that qualified electors who are caused to be disenfranchised are provided a ballot. The procedures would then be transmitted to the Legislature for their immediate approval or disapproval no later than 60 days prior to any election for which the ballots are to be cast.

The House amendment to the provision reads: “Only for the election of November 3, 2020, a qualified elector, who would have otherwise been able to vote in person, but by act of the government was caused to be absent from the territory on Election Day in person.”

The House also added this language: “The Chief Election Officer shall dutifully enforce the laws governing requests for absentee ballots. A copy of the procedures employed by the Chief Election Officer to enforce this chapter shall be transmitted to the Legislature no later than 30 days prior to the printing of ballots for each election or as soon as reasonable or practical.”

The House further deleted the whole section in the current election law which gives the Chief Election Officer authority to adopt, amend and repeal rules under the Administrative Procedure Act, governing elections, election procedures and the selection, establishment, use and operation of all voting systems now in use or to be adopted and all other similar matters relating to elections that in his judgment shall be necessary to carry out the purpose of this title.

Instead the House amended the bill to allow off island absentee voting for stranded voters only for this year’s election.

A concern of lawmakers was how the Election office can verify voters genuinely stranded off island due to COVID-19, and also in the event there is a repatriation flight, how to prevent voters who cast ballots from off island, from voting again locally. Also how to ensure that registered voters stuck in countries other than the US due to the border closures can also vote absentee.

The Chief Election Commissioner revealed that 188 ballots for stranded voters who have requested absentee ballots are being mailed out.

He assured that all steps have been taken to ensure that all of these requests are from voters who are genuinely stranded due to the pandemic.

Dr. Uiagalelei said when these ballots are received they will be put aside and not mingled with other ballots.

House Speaker, Savali Talavou Ale stated that the bill is very simple, instead of adding more language to make the bill contradict itself, just add those who are stranded off island due to the pandemic to the list of those who are eligible for absentee ballots to make is easy for the Election Office to do their job.

Committee members have questioned the authority by the Chief Election Officer to mail 188 ballots for stranded voters who have requested absentee ballots while the bill to amend Title 6 of the election bill is not finalized.

While the Election Office believes that it has the authority under existing law to amend the election rules to accommodate voters who are stranded off island due to the pandemic, Savali told representatives last week that the only way to allow these votes is to amend the election law by passing legislation that is then approved by the Governor.

During a discussion in the House chamber last month, Savali also told representatives that there is absolutely no provision under the election law that allows local voters and candidates intending to run for public office, who are stranded off island due to the coronavirus pandemic, to vote absentee.

In his letter to Fono leaders, Gov. Lolo M. Moliga said that the COVID-19 pandemic has compelled “us to navigate unchartered waters” and forced us to find new operating schemes to address new challenges.

One of these fundamental rights, according to Lolo, is the “right to vote” in general elections satisfying one of the basic democratic principles granting them the freedom to cast their votes for the leaders of their choice.

He further stated that it appears that some have opposed extending the privilege to stranded residents claiming that extending this privilege is outside of the legal purview of Title 6 of the A.S.C.A.

The emergence of this election anomaly is being perpetrated by COVID-19 induced restrictions and it appears that the existing law does not provide a definitive pathway to ensure that our stranded residents’ voting rights are being preserved.

As the Administration was in the process of preparing the appropriate legislation to submit to the Fono to amend the election laws and allow registered voters stranded off island to vote, Lolo said that he was informed that legislation had been introduced in the Senate by Sen. Faamausili Mau Mau Jr to amend Title 6 to allow local residents stranded outside to cast their vote in absentia analogous to the other categories of residents permitted to cast absentee ballots.

Lolo then commended Sen. Faamausili and the Senate for their sensitivity to the plight being faced by our stranded residents and ensuring that they have a say in the selection of our next set of leaders for our island.