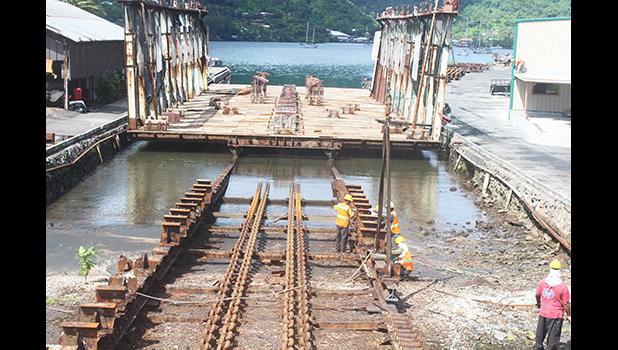 Gov says this is one of the "quickest ways" to improve shipyard operations
By
Samoa News staff
reporters@samoanews.com

Gov. Lolo Matalagi Moliga made the revelation in his 2019 State of the Territory Comprehensive Report to the Fono and the US Department of Interior. The governor also revealed that the Shipyard Authority board has come up with a “diversification plan” for the facility.

Before the Fono took its four-week midsession recess, some lawmakers expressed interest in calling a hearing to find out more about the information in the governor's report, and also get an update on the status of the shipyard, including the ongoing upgrade to the 3,000 ton slipway which would serve large purse seiner vessels, meaning more income for the shipyard.

A hearing is expected to be held when the Fono reconvenes next month.

According to Lolo, “One of the quickest ways to improve the shipyard’s operations in achieving desirable outcomes is to develop strategic partnerships outside of the Territory with companies within the same industry that possess vast experience, credible expertise, and adequate resource.”

The shipyard “has consummated collaborative agreements with such partners for the purpose of sharing resources, expertise, and wherewithal in promoting business opportunities and opening new markets for the mutual benefit of all,” the governor said.

One of the partnerships is with Honolulu-based Marisco Limited, a military certified full-service shipyard company which has been in business for over 30 years “and has vast capabilities and influence in the Pacific region”.

Samoa News notes that Marisco had sued ASG — during the Togiola Administration — at the federal court in Honolulu around 2011 for failure to pay services provided. The federal court sided with Marisco in a judgement of more than $811,000 against ASG.

The government appealed the lower court’s ruling in 2012 and when the Lolo Administration took office in January 2013, the appeal was withdrawn, with Lolo saying his administration “intends to honor the government’s obligations, whether arising from contract or court order.”

“We will stop the practice of using the courts to help manage the government’s cash flow,” he said.

Services provided by Marisco included upgrades to the Sailele tugboat, which ASG purchased from Marisco around 2011.

The shipyard’s second off-island partner is Armstrong, a Seattle-based boat building company that the governor says “has enormous capabilities and repudiation in designing and building small boats of multiple purpose and sizes, and their specialty is in aluminum constructed boats.”

Armstrong provided more than two years ago the vessel design for the government’s super alia project.

According to the Comprehensive Report, the Shipyard’s Board and Management have postulated that in order for the shipyard to survive in a declining market, “it has proactively developed and adopted a response via a diversification plan”.

“The core of the plan is to use the current skills and resources and expand it to non-traditional industries other than boats,” it says. “The plan must be anchored on a solid footing in order to make it functional in the long term.”

The “three most prominent elements” of such plan are: establishing the Shipyard under full Authority, capacity building, and developing a new business model.

The shipyard is currently operating under an executive order, issued May 2011 by then Gov. Togiola Tulafono, whereby a five-member board of directors is appointed by the governor to oversee the management and operations of the Ronald Reagan Marine Railways shipyard.

And because this semi-autonomous agency operates under an executive order, board members are not subject to Fono confirmation.