Siaumau Jr. gets the maximum punishment: 15 years behind bars 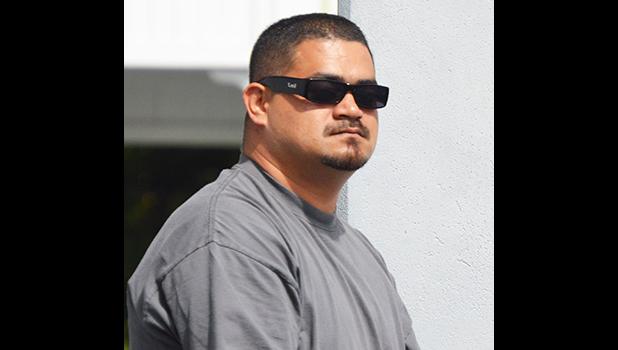 The most serious charges are dismissed, pursuant to a plea agreement with the gov’t
By
Ausage Fausia
ausage@samoanews.com

Pago Pago, AMERICAN SAMOA — A man from Vaitogi with a lengthy criminal record has been sentenced to 15 years behind bars. Elliott Siaumau Jr., 36, appeared before Chief Justice Michael Kruse last week for sentencing. He was initially charged in 4 separate cases.

But under a global plea agreement with the government, accepted by the court, Siaumau Jr. pled guilty to one count of resisting arrest, and two counts of first degree property damage — all class D felonies, punishable by up to 5 years in jail, a fine of up to $5,000 or both for each count.

Under the plea agreement, Siaumau Jr., admits that on Apr. 21, 2017 he went to the Leone Substation to pick up his son who was involved in a fight with students from Leone HS. He further admits that cops tried to stop his vehicle on the main road in Futiga so they could take his son to the police station for questioning; however, he didn’t stop — instead, he continued to drive home to Vaitogi, thus resisting arrest.

Siaumau Jr. further admits that on Apr. 24, 2019, he damaged a vehicle belonging to another man by smashing the windshield with a hard object, thus committing first degree property damage. According to Siaumau Jr., he became upset after the victim failed to pay him the money he owed.

Also in April of last year, Siaumau Jr. admits that he damaged yet another vehicle, belonging to a different victim, by shattering the window of the driver’s side with a tool — thus committing first degree property damage.

One of the concerns the court had when the global plea agreement was announced last year, was why the government moved to dismiss the more serious charges filed against the defendant. Samoa News understands that one of the reasons cited was that the cop who was the lead investigator in all of Siaumau’s cases is no longer a police officer. (This was also the case for Manu Lefatia — See yesterday’s Samoa News for details).

When given the chance to speak, Siaumau Jr. apologized to God, the court, and people of Am Samoa for violating the laws. His special apology was towards his mother for not helping her with their family business, and his children for not being with them for many years. He also apologized to all the victims affected by his actions — including a man by the name of Tone Fuimaono — and all the police officers he disrespected.

Working as a truck driver for his family business, Siaumau Jr. said his mother really needs him home not only for the business but also for other obligations. He begged the court for a second chance. “I spent many years of my life in jail and I now told myself that I don’t want to live in jail anymore,” he said.

Defense attorney Rob McNeill asked for a probated sentence so his client can be with his family, especially his young children. He said that despite the seriousness of the charges against his client, he believes Siaumau Jr. is a changed man who is truly remorseful and takes full responsibility for what he did. McNeill also asked the court to grant work release for his client so he can assist his mother with the family business.

Prosecutor Doug Lowe disagreed, arguing that Siaumau Jr. be sentenced to the maximum punishment allowable under the law. Lowe said the government considers Siaumau Jr. a very dangerous and violent man. “He doesn’t deserve any more chances from the court. He deserves to be in jail for a long period of time. The government believes the community will not be safe if this man is around.”

Lowe also objected to the request for work release, saying, “This man does not deserve a second chance or a probated sentence. He must pay the price for his actions.”

Kruse agreed and sentenced Siaumau Jr. to the maximum 5 years for each of the three charges he pled guilty to. All three sentences will run consecutively, meaning he will serve 15 years behind bars.

Pursuant to terms of the plea agreement, all remaining charges including the most serious charge of robbery and unlawful possession of methamphetamine with intent to distribute were dismissed.