Silent struggles of the COVID-19 lockdowns in the Pacific 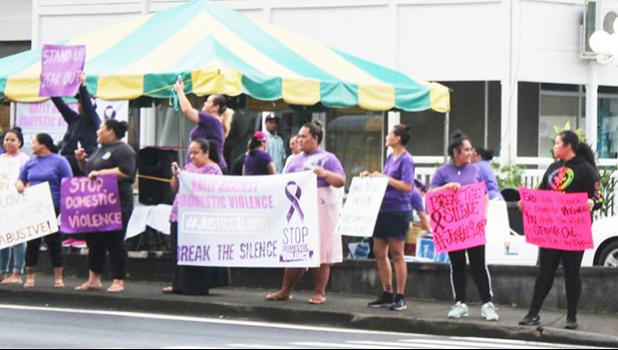 Suva, FIJI — Research has revealed that gender-based violence in Pacific Island nations was exacerbated at the height of the COVID-19 lockdowns.

Pacific Islands Forum Secretariat Gender Specialist Fiona Hukula said the cry to be heard and rescued from these existential crises for women were real.

She said support groups have experienced a big increase in calls.

"In Papua New Guinea, the 1 Talk Kaunselling helpline increased its call hours and capacity in anticipation of an increase in calls.

"Likewise, the toll-free national helpline in Fiji recorded a 300 percent increase in domestic violence-related calls one month after curfews and lockdowns were implemented. In April 2020, there were 527 recorded calls, compared with 87 and 187 calls in February and March, respectively.

"During the first six weeks of lockdown in Samoa, the Samoa Victim Support Group responded to 415 calls through the helpline, with 46 distress calls resulting in police intervention to stop domestic violence in the home," said Dr Hukula.

Dr Hukula said women's groups reveal that while family violence or violence between intimate partners is the most common form of violence reported, other forms of gender-based violence, such as rape and sexual harassment, remain a cause for concern.

But this wasn't all; the violence in secrecy was also coupled with other forms of emotional abuse.

"During this time of living through the COVID-19 pandemic, it is crucial to remember that emotional violence and coercive control are equally important forms of violence experienced and often goes on unspoken," said Dr Hukula.

She added while violence against women in the region is the most prevalent form of gender-based violence, they recognise that marginalised groups, including persons with disabilities and LGBTQI, also suffer from violence.

"Violence is unacceptable. Period. Whether it's against women or marginalised groups. Hence the conversation around inclusivity is necessary," she said.

The pressures of unemployment and financial difficulties resulting from the pandemic are linked to increased domestic violence against women.

The Pacific Islands Forum highlighted that because island country economies are heavily dependent on tourism, the border closures impacted not only businesses but also individuals and families.

Dr Hukula said the loss of income and lockdown measures caused anxiety and stress for many across the region.

She added that because many communities were restricted to homes, the burden of care for children, the disabled and the elderly likely rested on women.

"Lockdowns, loss of income and uncertainty around many things, including vaccine hesitancy, led to mental health concerns, the need for adequate services, and the strain on health systems and health workers.

Dr Hukula explained that a concerning taboo culture relating to mental health existed in the Pacific.

"At a time like this, where anxiety is at its highest, creating conversations about mental well-being is crucial and needs to be brought out to the open because it can impact gender-based violence."

Dr Hukula said gender-based violence, is one of, or if not the, most critical obstacles to reducing inequality between men and women and building sustainable, resilient communities.

She said the importance of women's voices for diversity and inclusion could not be understated, especially during these trying times.

"Efforts to address gender inequality in the region have a long history, with Pacific feminists and women's rights activists leading the response in advocacy and service provision. But we still have a long way to go in addressing gender inequality, particularly gender-based violence."

She said leadership also supports equality for all, calling for women to have more leadership roles in all spheres of life. She stated that the lack of women's leadership at the highest political level also slows progress.

"It is very pleasing to see that Samoa has elected its first female Prime Minister and the Solomon Islands has elected three women to Parliament. This is a sign of progress; however, some countries have no women at the highest level of political representation."

WHERE TO FROM HERE?

The culture of communication and reporting domestic violence is an ongoing struggle within the Pacific.

Dr Hukula said domestic violence or gender-based violence is not often reported. So the incidents brought to the forefront come through reporting either through the formal system or service providers.

She explained that with the existing taboo culture finding a Pacific solution could add to the solution.

"Victims of domestic violence choose options based on their needs. Sometimes they choose to go to other forms of redress, whether through a community or village court, to their local church member or family members, and they come together to mediate this issue."

Dr Hukula explained that sometimes a communal or informal setting of redress could be the solution to increasing the reporting of domestic violence.

"For example, women don't report domestic violence incidents because if he is charged, their families' well-being can be questioned because the husband is the breadwinner. This doesn't serve anyone because this matter goes undetected."

However, Dr Hukula stressed a balance or tailored solution is essential.

"There are some forms of violence that require criminal investigation. For example, if there is a case of sexual abuse, then this must go through the justice system."

Dr Hukula explained that prevention is the key and getting ahead of the issue is what needs to be done.

"We should be talking about how to prevent violence, so we don't get to a situation where women who are survivors of violence are weighing out their options."

She added that the Pacific ought to be proud of its efforts thus far to address gender-based violence, highlighting that more needs to be done.

"The prevention measures need to start in our homes, our communities and particularly with our young people. Working and advocating for healthy ways and respectful relationships is what needs to be done yesterday.

The following organizations throughout Oceania can provide support for victims or further information for those who wish to know more: