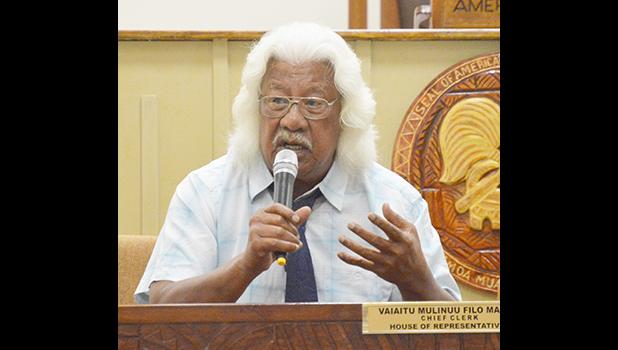 Pago Pago, AMERICAN SAMOA — After hearing from Dr. Iotamo Saleapaga — the Chief Medical Officer at LBJ Hospital and also a Coronavirus Task Force member — that there are no plans at this stage for repatriation flights, the House of Representatives plans to send a resolution to the governor requesting flights to bring home residents who have been stranded off island due to the COVID-19 pandemic.

According to the resolution passed by the House on the last day of session, Gov. Lolo Matalasi Moliga’s closing of the borders has been attributed as the reason American Samoa remains one of handful of countries without a single case of the deadly virus. However the resolution also points out that since the government is the authority that has prevented their return, it would be “prudent” that ASG offer relief to these stranded citizens with their “financial struggles”.

Dr. Saleapaga was the only member of the Coronavirus Task force who showed up for a hearing of the House Health Committee yesterday morning.

The main issue that the committee focused on is repatriation of residents who have been stuck in Hawaii and the U.S mainland, and a flight to take medical referrals off island.

The medical doctor testified that a medical charter to take patients for off island treatment is being planned however there’s no plan for a repatriation flight to bring stranded residents home.

He said that the medical charter may happen within the next two weeks and as of now there are over 100 patients that need to be taken off island.

He made it clear that the medical flight will not bring anyone from the mainland or Hawaii.

He said House members should be well aware of the state of the coronavirus pandemic in Hawaii and the mainland and while everyone feels for our people who have been crying to come home, the only way to protect the territory from this deadly virus is not to have any case reach our shores.

He said many Samoans have died from COVID-19 in Hawaii and other states.

And if the virus enters the territory it will spread like wildfire and the hospital’s 150 beds will be inadequate, with not enough doctors, nurses and support staff to take care of the sick.

He urged patience and restraint saying that there may be a vaccine by November and once the pandemic has been contained, travel can resume.

Vice Speaker Fetu Fetui Jr. didn’t hide his disappointment. He said it appeared that the Coronavirus Task Force is not considering or making any effort to bring our people home.

He pointed out that ASG has an office in Hawaii that should be helping with arrangements for a repatriation flight.

Fetu said Samoa has been bringing home its people from Australia and New Zealand and asked why we can’t do the same. He asked Saleapaga if it was because our doctors are not prepared or qualified to do what’s necessary for repatriation flights?

The Manu’a lawmaker said inaction may affect their reelection efforts.

Saleapaga responded to not bring up what Samoa is doing and apply it to American Samoa’s situation.

The vice Speaker told him that in a conversation with Director of Health Motusa Tuileama Nua, he learned that DOH is ready with a plan for a repatriation flight in the event that one is approved.

Saleapaga confirmed this but he said his own personal opinion is a repatriation flight is not advisable at this time. He said American Samoa remains the only part of the United States that is COVID free and we should be happy that we are safe.

Rep. Gafatasi Afalava asked if COVID-19 funding could be provided to help those local residents stuck off island.Saleapaga said he wasn’t in a position to answer this question but he would recommend to the Task Force that financial assistance be given to those unable to return home.

Rep. Vesiai Poyer Samuelu said some of the local patients awaiting referral off island are critically ill and wondered why the medical flight wasn’t happening until two weeks time.

He said hundreds of millions of dollars have been received in COVID money to protect the territory form the disease, however this money is being used on for non COVID related construction projects.

(Read elsewhere in today’s Samoa News edition, Congresswoman Aumua Amata responds to Samoa News queries about the Tagata Tutu Fatasi Alliance of American Samoa’s letter to her about repatriation and support for their financial woes caused by the closure of the territory’s borders.)

The resolution in summary “respectfully requests the governor to provide relief to residents stranded off-island as a result of the border closures and the efforts by the government to prevent the deadly Covid-19 from entering our shores. The governor is requested to provided financial assistance, from any available source, to assist with lodging, meals and meeting obligations.”

The resolution explains the background to the closure of the territory’s borders, including noting that “the final flight to and from the state was March 26, 2020, and for nearly six months, residents who were off island have been left stranded with no clear indication as to when they will return.”

It further explains why these stranded residents left and points out “their travels were planned, being mindful of their finances.”

However since the border closure, the resolution notes “residents have reported extreme financial hardship as they struggle with unanticipated costs for lodging and daily provisions. They have had to rely on the kindness of loved ones and have asked for assistance from the government, which is the authority that has prevented their return.”

The resolution loosely outlines relief to the financial struggles of those stuck off-island due to border closure.

“For government workers, it would be proper to pay them for a full-workweek, until such time they are able to return. The cost-of-living in the states is much higher than the territory and the government should provide supplemental financial assistance to help pay for basic necessities for bona fide and qualified residents.”

For others, the resolutions says that “the COVID-19 Task Force should request the use of some of the funds received to combat the spread of the virus for residents stranded off-island by the border closure. Needed most by affected residents is help with lodging and basic provisions such as food and personal items. It would be practical to use funds to provide lodging in Hawaii so that residents can be closer should the government decide to open the border.”

The resolution further says that “a request should be made to the local Medicaid office and the Centers for Medicare and Medicaid Services (CMS) for assistance for those residents who traveled for medical reasons. CMS has approved the use of funds to send residents to New Zealand and the country has benefited greatly from the program. Similar assistance should be given to our residents and provided in the State of Hawaii where money could be injected into their economy. The program has permitted travel and lodging to both patients and caretakers. The same should be allowed for those in a U.S. state.”

It concludes that while protecting our borders is paramount, “however, the government must not forget our residents who are unable to return because of our efforts to guard against COVID-19 pandemic.” The resolution respectfully requests the governor to provide financial assistance, “from any available source”.