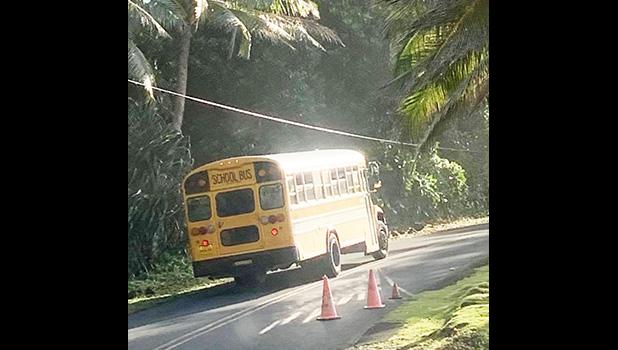 The hearing dealt with an emergency motion for a temporary restraining order (TRO) and for a preliminary injunction for AST Telecom to immediately remove hazardous low hanging telecom cable that is “immediately a real threat to safety and property” in Alega village.

The motion was filed last week Wednesday by plaintiffs — Steven Jay Pincus Hueter, Rosalia Tisa Faamuli, Michael S. Kirk, and Faamuli Pete Faamuli — as part of their ongoing lawsuit against AST Telecom, which is accused of, among other things, violation of federal law by improperly hanging and attaching its telecommunication cables on trees and land belonging to the plaintiffs in Alega village and on the official private Alega Marine and Wildlife Sanctuary and Reserve.

In their TRO and preliminary injunction motion, plaintiffs said that on May 18 and May 19th, they had informed attorneys for the defendants — which include current and former AST Telecom executives —  regarding the low hanging cable in Alega on the main highway between poles 3 and 4,  and demanded immediate removal of the cables.

During last Friday’s hearing, the defendants’ Honolulu-based attorney, Christian K. Adams of the law firm Adams Krek, LLP reported to the court that his client confirmed that the low hanging cables were re-secured and are at the appropriate height, according to court records, which also states that Hueter had argued that as of last Friday, cables are still below the appropriate height.

The court then instructed plaintiffs to file a new TRO motion and the court also instructed Adams to reach out to his client regarding this issue.

By late Friday afternoon, plaintiffs contacted Adams via email saying that the cable wires are still hanging low “in violation of common sense and safety code”. Plaintiffs requested AST Telecom to immediately come out to Alega to be shown the specific locations of the low-hanging cables. Plaintiffs also recommended that AST Telecom come out over this past weekend.

Adams responded saying that his client would be happy to inspect the existing cables on the Faamuli property and fix any conditions that need to be fixed.

The two parties were to communicate the time to meet in Alega to address the low hanging cables on the main highway. No new updates from the weekend were available at press time.