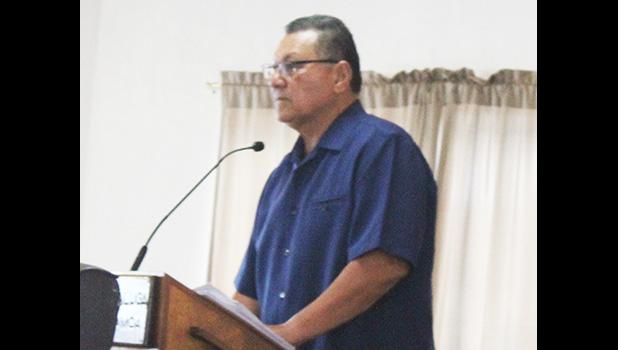 Looks like it will pass in final reading
By
Fili Sagapolutele
fili@samoanews.com

Pago Pago, AMERICAN SAMOA — The Senate passed yesterday in second reading, its version of the Administration’s bill, enacting a temporary funding gap appropriation for the government, with one amendment, which is made to the bill’s preamble, stating that the Fono did pass the fiscal year 2021 budget and submitted it to the governor for his consideration.

The Senate version is set to go through third and final reading today. The preamble originally stated that the Fono didn’t pass the FY 2021 budget.

The Senate’s decision on the bill, made during it’s session yesterday, followed a Senate Budget and Appropriations Committee hearing early in the day, in which ASG Treasurer Ueligitone Tonumaipe’a was called to answer questions on the legislation.

Tonumaipe’a made claims at the outset of his opening statement, saying that he believes the bill originated from the House. He said that he has been advised by the governor and the Attorney General’s Office that only issues on the agenda for the special session — called by the governor — can be discussed by ASG witnesses.

However, he was also advised by the governor to go ahead and answer any questions raised by lawmakers.

Committee chairman Sen. Magalei Logovi’i raised the two issues on which the Senate wanted an explanation — funding source of the bill and total amount to be spent because it’s not cited in the language of the legislation.

Tonumaipe’a, whose appearance before the committee lasted for less than 10-minutes, explained that the governor had already made clear to cabinet members that they are to use funding levels of FY 2020 budget and that’s where the government operates at this time.

After the ASG Treasurer was excused, the committee called in the Fono legal counsel, Nathaniel Savali, who was asked about the bill and whether it’s a House bill or Administration bill.

Sen. Tuaolo Manaia Fruean said that, looking at the measure, its clearly labeled as an “Administration request”.

(Samoa News notes that all bills from the administration are clearly marked as an administration request and this is shown on the current legislation being discussed.)

The legislation states in part that, appropriations and funds made available and authority granted pursuant to this Act shall be available until whichever of the following occurs first:

•     expiration of a 30-day term following the effective date of this Act.

During the committee hearing, senators sought an explanation as to when the 30-days become effective to which Savali responded that the 30-days starts on the date that the bill is signed into law by the governor.

There was a discussion among the senators as to whether to keep the 30-days or amend the bill to reflect 60-days.  In the end, the majority agreed with 30-days.