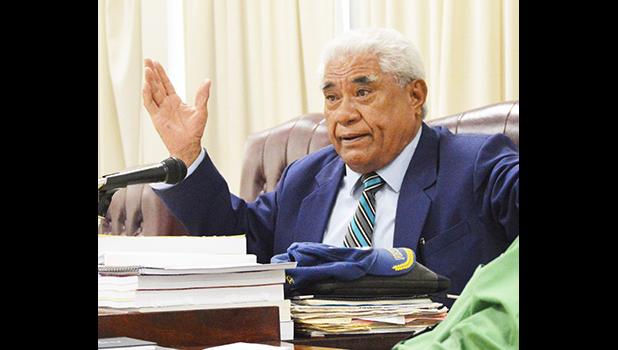 Pago Pago, AMERICAN SAMOA — A resolution is now before the House chamber requesting a study for the construction of a bridge connecting the Island of Aunu’u to Tutuila.

The resolution is sponsored by Saole Representative Titiali’i Kitara Vaiau and is now transferred to the House Public Works committee for a hearing.

According to the preamble of the resolution, traveling by boat between Aunuu and Tutuila is one of the most dangerous forms of transportation in the territory. More lives have been claimed by the treacherous channel than by any other route since boats began transporting passengers from the Auasi wharf to Aunu’u.

For years, residents of Aunu’u have pleaded with the government to provide security for travelers by properly constructing wharfs and dredging the areas around them so that entrance into and out of these loading areas can be done safety. The first major relief for residents of Aunu’u came in 1981 when the Army Corps of Engineers constructed the current wharf with a connecting wharf in the village of Auasi on Tutuila.

However, not much has been done to improve both wharfs since then and the woes of the people continue including many lives which have been claimed to the treacherous route.

For over the years, the Department of Public Works announced that it will provide dredging as an accommodation for the traveling public. Because of constant and heavy wave activity, underwater sand mounds are created near the entrance to both wharfs. Many times boats capsize or are pushed into the rocks because of these waves. Relief has yet to come and the years of waiting continues.

The season of high waves, which can last for weeks at a time, makes the channel impassable. Prior to the use of alia to ferry passengers, residents relied on row-boats ,which utilized an old marine landing site to come ashore. Currently, residents rely on family-owned boats to carry persons and goods to the islands and those boats are also a source of misplaced security Alia capsize often and in the recent years, lives have been lost.

According to the resolution, the most reasonable, efficient, and permanent solution for travel to and from Aunu’u would be to construct a bridge that would connect Aunu’u to Tutuila. A bridge has many benefits to both the economy and more importantly, the safety of travelers to Aunu’u.

Economically, Aunu’u can become the center of tourism for the Eastern district. Located on Aunu’u is an abundance of flora and fauna sought by many tourists who wish to take in the environment and all that it offers. Aunu’u is also home to the only known quicksand pit in the territory and Vaisuatoto (Blood Lake) which is part of Samoan folklore known to all residents of the island.

A hearing to discuss this resolution is not yet set.