Summer Youth Program 2021 opens with an emphasis on Manu’a 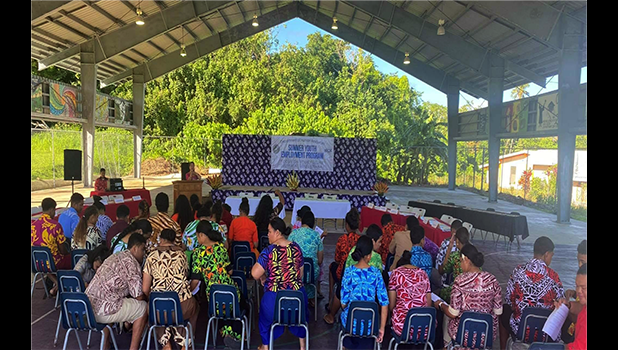 Pago Pago, AMERICAN SAMOA — The American Samoa Summer Youth Program 2021 officially opened on June 21, 2021 with a record 1,500 students registered for both Tutuila and Manu’a — the largest number since the program began.

While in Manu’a for the opening Lt. Gov. Talauega Eleasalo Va’alele Ale laid the groundwork for July’s Manu’a Day flag raising at the historical grounds ‘Avaloa” where most of the activities will be held this year.

Under the theme “Focus on your Future”, a press release from the governor’s office says the mission of the Summer Youth Program is to provide quality, innovative teaching and learning experiences that promote academic studies and career awareness. ASG’s Human Resources director believes through hands-on, discovery based programs, students break out of their comfort zone and stretch their imaginations-without the pressure of grades, exams, or assignments.

During the opening of this year’s program, HR director, Lynn P. Alaimalo emphasized that employment can be beneficial for youth by teaching responsibility, organization, and time management and helping to establish good work habits, experience, and financial stability. There are many advantages to working during high school, especially for low-income youth, including higher employment rates and wages in later teen years and lower probabilities of dropping out of high school.

According to Director Alaimalo “knowing how to find and keep a job is not only critical for admission to the adult world but also is an important survival skill for which there is little in the way of formal, structured preparation.” She added, “As long as young people are provided with quality work experience and acquire skills for which there is likely to be employer demand, the program could prove successful”.

In Manu’a, Lt. Governor Talauega V. Ale echoed these same sentiments. In his keynote address at the opening ceremony for the program there, the Lt Governor told the close to 40 students attending, “that working while in high school has been linked to improved academic performance, decreased dropout rates and increased rates of general educational development. Youth who work during high school are more motivated, perform better in school, and are more likely to connect school work with future success,” the Lt. Governor said.

With deep roots in Manu’a, Talauega told the youth that it was Gov. Lemanu Peleti Mauga who pushed for this program to continue when issues regarding funding for the program started to surface earlier in the year.

The Lemanu and Talauega Administration will continue to uphold its promise to provide career development opportunities for our youth. Programs that provide our youth with real-world work experience while still in school to help participants gain necessary soft skills such as the ability to work in teams, communicate, solve problems, and behave appropriately in a professional setting, the press release reiterated.

Under the program, following training of up to 6 weeks in basic employability skills, students may be offered internship placements of 4 to 12 weeks over the summer period. Participation in the program is voluntary, with students who do take part working for 20 to 25 hours per week.

After the ceremony, the Lt. Governor and members of his entourage visited the sites and school facilities in Faleasao and Tau that will house visitors during the Manu’a Flag Raising Ceremony in July. The Lt. Governor also inspected the historical grounds ‘Avaloa” where most of the activities for this special day will be held including the flag raising ceremony.