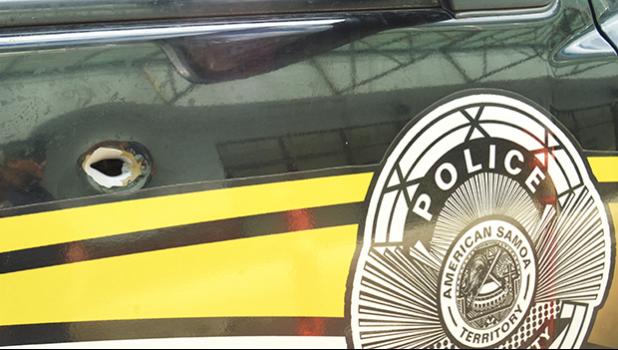 A second individual is being sought
By
Fili Sagapolutele
fili@samoanews.com

A man, with a criminal record, accused of shooting at a police vehicle two weeks ago has been arrested and the District Court has set “no bail”, while a warrant for another suspect has been issued in the same incident, which has been described by police as a “cowardly” act.

Responding to Samoa News inquiries yesterday, Police Commissioner Le’i Sonny Thompson confirmed that an arrest was made last week in the shooting and the suspect’s name is Thomas Siaumau.

However, “I cannot comment on the charges because the investigation is on going and will be until this matter is resolved,” he said yesterday, adding that police have a warrant for another person and are looking for that individual.

Siaumau made his initial appearance on Tuesday in District Court and another hearing was held yesterday, where the defendant waived his right to a preliminary examination and his case was bound over to High Court for arraignment tomorrow (Friday Dec. 29).

Assistant Public Defender, Ryan Anderson sought the court’s permission to address a bail amount, saying that “no bail” was set for this case, but under the Revised Constitution of American Samoa “my client is entitled to bail.”

Anderson acknowledged that his client has a criminal record, but added that the charges are just allegations. “He is entitled to some amount of bond,” he pointed out.

Pengelly pointed to two previous cases, which set a precedent of “no bail” for the defendants involved in those cases.

Sunia explained that the defendant is charged with “several felonies.” He also said the court reviewed prior cases with similar matters. In one matter, the High Court upheld denial of bond in a case that involved shooting at a police officer; and in the second case several charges of assault were involved.

After considering these two cases and other binding cases, he said the motion to set bail is denied; however, the defense “is free to revisit” the bond issue in High Court.

As previously reported by Samoa News, the alleged shooting at the DPS unit occurred late on the night of Dec. 14 into the wee hours of Dec. 15, with two officers, responding to a call from a security guard at the ASTCA compound in Tafuna.

Le’i told Samoa News at the time that police were responding for assistance  after what appeared to be a cherry bomb that was thrown by an unknown individual/ or individuals inside the compound.

The police unit arrived at the scene a few minutes later and conducted the usual search of the compound, and when the patrol was finished, police officers then extended their patrol to the Tony Solaita Baseball Field, which is located to the back of the ASTCA compound, and that’s when they noticed that the gate was open.

One of the police officers went to check out why the gate was open, while the other officer drove the police unit closer to the gate.

According to the commissioner, both police officers then went inside the baseball grounds to check out why the gate was open. It was while they were on the grounds, one police officer saw a flash coming from the front, and identified the flash as what appeared to be a flash out of a weapon.

“And that’s when they realized that somebody was shooting at the police unit, and when they came back to where the police unit was parked, they noticed that the rear window of the car was shattered, and what appeared to be another shot had penetrated through the right front door of the passenger’s side,” Le’i said.

Le’i called this action a “cowardly and unprovoked act” that is not to be tolerated.