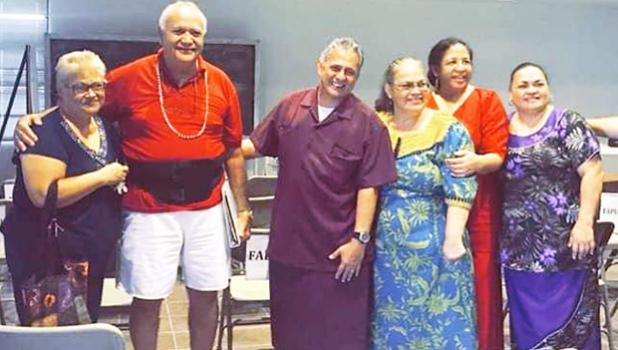 The outcome of Swains Island selection is the first results of this year’s mid-term election set for Nov. 6th. The Swains selection, as in past years, has always been held prior to the election date.

Su’a told Samoa News yesterday that he was the only candidate nominated during the meeting, followed by the support by his constituents. “Everything went well in our selection and we had approximately 40 people present,” he said, noting that Chief Election Officer, Dr. Lealofi Uiagalelei opened the meeting and turned it over to the Swains Islanders to carried it out.  Zenopia Jennings was selected to conduct the meeting.

“I’m very thankful and grateful for the support from my constituents for another term in office. Their vote of confidence gives me more strength to continuing serving them as well as all people of American Samoa,” he said in a phone interview.

“There’s a lot of things of things that I will continue to pursue in the next two years for not only Swains but American Samoa as a whole,” said Su’a, who served as chairman in the 35th Legislature for the House Agriculture, Fisheries, Forestry Committee.

Election Office officials were present during the meeting in their capacity as observers. Election Office confirmed to Samoa News yesterday that Su’a was re-selected and that “everyone was in favor” for the incumbent.

At the meeting, Su’a also made a presentation about the breadfruit flour, which his company, Dream Builders Agriculture Products, is producing. (See Samoa News edition Oct. 26 for the latest update).

During the meeting, Su’a was also given the opportunity to give a report on his work. He explained that transportation continues to be the biggest challenge for Swains Island. “Not only due to lack of adequate funding to operate the MV Sili, nor the MV Manu'atele, but the poor condition of the vessels for transportation,” he points out.

In May 2017 a defective plumbing system, engine breakdown, and other problems forced the MV Sili to return to port for repairs, after nearly 10 hours on the open seas heading to Swains. After the repairs the MV Sili departed for Swains again, only to break down again on Swains, requiring the assistance of the MV Manu'atele.  The charter ended up costing the faipule over $25,000.

“Since that incident the Governor has proposed and was approved in the 2018 budget to increase the Swains Island Transportation from $50,000 to $350,000 both Swains and Manu'a,” he said.

Besides Su’a other returning House members for the 36th Legislature which opens Jan. 14, 2019 are Reps. Vailoata Eteuati Amituana’i and Kitara Vaiau — both running unopposed this year.

All House members of the new 36th Legislature will be sworn in to office at 12noon on Jan. 3, 2019 - in accordance with the local Constitution.