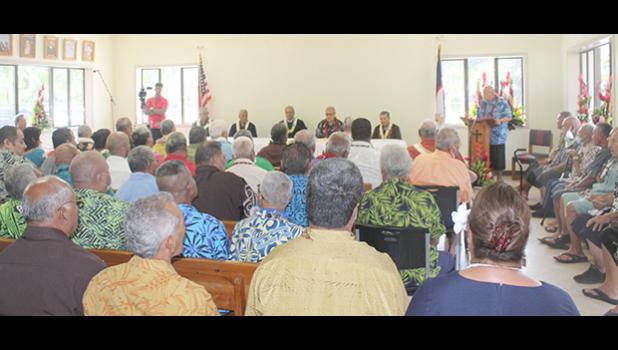 Pago Pago, AMERICAN SAMOA — “You are the eyes and ears of the government in your respective villages, who are appointed to enforce all village regulations and responsible for the welfare and good order of the people in the village, so please, do your job.”

This was the special message from the Secretary of the Samoan Affairs, Paramount Chief (PC), Mauga Tasi Asuega during the swearing-in of almost 90 traditional leaders including county chiefs, village mayors (pulenu’u) and police (aumaga) who took the oath of office in the ceremony this past Monday morning at the Samoan Affairs main office in Utulei.

The swearing-in was administered by Associate Judge Su’apaia J. Pereira and witnessed by Mauga and District Governors from the three districts. Speaker of the day was deputy secretary of Samoan Affairs, Tauese Vaa Sunia.

Five pulenu’u were unable to take the oath for office this past Monday. Three are still stuck off island, while two others did not submit all the documents as required by law.

The required form the two pulenu’u each failed to submit before the swearing-in ceremony is the result of a drug test from the Department of Homeland Security.

Tauese informed the two specific pulenu’u that this issue was discussed during their last meeting before the swearing-in ceremony that all county chiefs, pulenu’u and aumaga must submit their drug test results before anyone can take up the office.

Before the swearing-in ceremony, PC Mauga delivered his special remarks to all the traditional leaders appointed by their respected villages and district to serve.

Mauga reminded them the importance of their role as traditional leaders. He also stated that village councils, village leaders and county leaders must play a vital role in the protection of their individual villages, as well as the entire district to enforce village rules.

He emphasized the need for the public, including traditional leaders, to work together with the government to protect the territory.

In particular, Mauga pointed out the increase of the drug problem in the territory today, which is affecting the lives of many of the youth. He shared that Samoans have become accustomed to reacting only after something happens, and urged those attending the meeting to be proactive instead — for the protection of island residents.

He advised traditional leaders to work together with village councils to enforce village regulations and report any suspected or criminal activities to law enforcement.

Several traditional leaders shared their view with Samoa News regarding the many issues currently happening around the territory, especially illegal drugs.

One of the new mayors told Samoa News that there’s a lot going on in American Samoa now and traditional leaders have a lot of work to do. He said that there’s rumors about marijuana is being grown in other villages, and there are also reports of individuals selling crystal meth, or ‘ice’ that is manufactured locally.

“But where are the pulenu’u and aumaga, who were given the responsibilities and duties of protecting their villages and counties, as well as enforcing village rules?” he asked, adding, “Why are they not doing the job they were sworn to do — to protect the community?”

As a new man on the job, the new pulenu’u said that he will do his best to make sure these sorts of illegal activities will not be seen or done inside the village anymore.

He told Samoa News that the reason that these problems continue in the territory is because aumaga and pulenu’u are not doing their jobs. He said they should report to the village council anyone found to be growing marijuana, causing problems, or selling ice, so that not only are village punishments then handed down, but so these issues can be reported to the Department of Public Safety.

“We need everyone to work together with the government to protect our community and prevent serious problems from occurring in American Samoa,” he said and his statement was supported by several mayors who spoke to Samoa News regarding the drug problem in American Samoa

One pulenu’u said that the government and traditional leaders need to work with officers from the Department of Public Safety, to put a stop and cure the problem of drugs in the territory. He said drugs are a real problem in the territory today, and there is a need for everyone to step up and do something to stop it.

“We heard reports from police and the media about the increase of the drugs problem in our island,” the pulenu’u said. "Drugs are still coming to our shores and if we don’t act today, the future of our children will be affected, and everyone, including parents and families, will also be affected. We need to act now.”

He said that everyone in American Samoa has a responsibility to fulfill in their families, villages, churches, and even inside the workplace. And that is, helping to combat the problem of drugs in the territory.

“…We have to stand together and lend a hand to the Police Commissioner and his people, to find ways to stop drugs from entering our country… and it’s our duty as leaders to find ways to cure the problem, and also find a rehab program to help them,” the pulenu’u said.

He further noted that domestic violence against women and young girls was also another major problem in the territory.

(Samoa News should point out that combating the growing drug problem is the main reason Gov. Lolo M. Moliga established the “American Samoa Drug Control Commission” and the former Police Commissioner Le’i Sonny Thompson re-constituted the Vice & Narcotics Unit, as well as arming police officers, with those in the Vice Unit allowed to carry 24/7.)

It was also made clear to all the traditional leaders that their role is clear in the law and they must act accordingly.

(1) be responsible for the welfare and good order of the people of his village;

(2) preside at the Village Council meetings and report all proceedings to the County Chief within 10 days after each meeting;

(3) report to the County Chief as to the order of the people of his village, the sanitary condition of the village, the state of the roads, and all matters to which the Village Council is required to attend, when requested to do so by the county chief;

(5) be responsible for the enforcement of all village regulations; and

(6) keep the records required by law

Secretary of Samoan Affairs, Paramount Chief Mauga Tasi Asuega, along with Associate Judge Su’apaia J. Pereira and District Governors from eastern and western districts, Matautia and Fuamatu during the swearing-in-ceremony of County Chiefs, Village Mayors and Police yesterday morning at the Samoan Affairs office in Utulei. Story and more photos in Wednesday’s edition. [photo by AF]