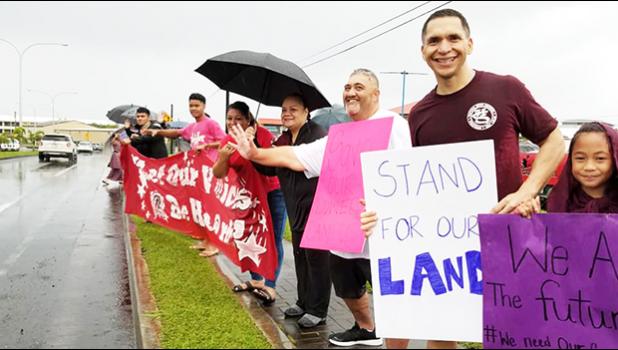 Pago Pago, AMERICAN SAMOA — The Tafuna High School’s Parents and Teachers Association (PTA) has submitted an official written request, accompanied by a petition with more than 1,500 signatures, to Gov. Lolo Matalasi Moliga to maintain the high school’s lower campus as space is needed for, among other things, the JROTC program and student body activities.

PTA president, William E. Sptizenberg made the official request last Thursday afternoon, while the following morning a peaceful protest-wave — organized by the Tafuna High School Alumni group — in front of McDonald’s restaurant in Tafuna, took place asking for the return of the lower campus to the needs of THS.

The wave, which caused traffic to slow down through the area, went on despite wet weather last Friday morning.

The lower campus will house the newly proposed centralized local Education Department (ASDOE) Building, and the E-Rate Office. The PTA, along with everyone else, was caught off guard with the governor’s decision to use THS’ lower campus to build “AS-DOE Central”.

“With humble hearts, we the PTA of Tafuna High School (THS) request your approval in allowing Tafuna High School’s lower campus to remain a permanent part of the school as it is a much needed space for our JROTC program, applied technology, art class and many of the school’s student body activities,” Sptizenberg wrote to the governor in an Oct. 15th official submission letter.

He points out that the lower campus “really helps” the high school manage the many classes it offers and separates out its student body without overwhelming the upper campus and staff.

Additionally, the lower campus has been home to the “JROTC program which has provided many opportunities for our students to pursue successful careers in the Armed Forces.” Furthermore, “many of THS’ JROTC graduates serve our country well and have achieved high ranks and prestigious awards in the military.”

“Relocating the JROTC to upper campus has worsened the overcrowdedness issue and is now very distracting to other classes, making it harder for students to focus on their studies while the JROTC are doing drills, PT’s, and other outdoor activities,” Sptizenberg points out.

The THS-PTA president explained that the lower campus’ wide-open field also serves as a place for the school’s many activities, including Samoan day festivities, JROTC drills, and as a practice field, etc.

While the PTA understands ASG’s desire to relocate the main ASDOE office from Utulei to Tafuna, “we feel that the vacant land fronting [AS]DOE’s property next to our lower campus is sufficient land for [AS]DOE’s new office building,” said Spitzenberg, who also provided aerial maps next to the lower campus, which show the available ASG property that could be used for the new Department of Education building.

He points out that there are also many vacant lots at Lions Park (referring to the government’s Tafuna Housing area, across from Lions Park and Pala Lagoon area) that can support ASDOE’s space requirement if needed.

“We strongly believe that the land surrounding public schools should be reserved for future growth of schools to better serve our children, the future of American Samoa,” Spitzenberg said, and pointed out that the school is already overcrowded with an enrollment of more than 1,100 students.

The PTA president suggested that constructing a new two-story building for the school on the lower campus area would provide much needed space for THS’s other programs, including the JROTC that the upper campus cannot accommodate.

“This will be a very welcome gesture reinforcing to the community your true desires for the welfare of our children in prioritizing their education and preparing them well to face future challenges,”Spitzenberg informed the governor.

The PTA stands together in support of keeping the lower campus as a permanent part of the high school “and truly believe you will stand with us in preserving this land for our children and future generations,” the PTA president wrote to the governor.

“We look forward to your favorable consideration and express our sincerest appreciation for taking time out of your busy schedule to review our humble request for assistance in this important matter,” he said.

Also included with the official request is the PTA petition, signed by over 1,500 supporters, who are made up of current students, parents and teachers of THS along with its alumni and many community members who “support keeping the lower campus as an integral part of the school,” Spitzenberg said.

The petition includes names of those who signed the online version, which are former students and graduates — such as the school’s JROTC program graduates, who currently reside off island.

(Samoa News should point out that there were no meetings or forums to discuss the location of a new DOE central office with the affected community; and Governor Lolo has never explained his decision making process for choosing the lower campus of the largest high school in the Territory to build a new DOE administration building.)