Talauega points to Lemanu’s integrity, experience in team’s kick off 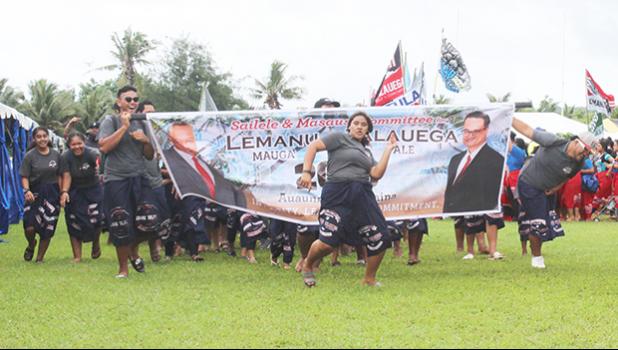 Pago Pago, AMERICAN SAMOA — Parade, floats, a youth flash mob dance and Samoan siva by various village committee groups, as well as speeches by the candidates marked the official campaign kick off for the Lemanu and Talauega 2020 gubernatorial team on the malae of the Veterans Memorial Stadium in Tafuna last Saturday, on a cloudy day on Tutuila.

“We are driven by Integrity, Leadership, and Commitment to serve the people of American Samoa. Our years of experience and service to the people of American Samoa are a testament of our unwavering commitment to improve the quality of life for all ...” declared Lt. Gov. Lemanu Palepoi Sialega Mauga, candidate for governor and running mate, Talauega Eleasalo Va’alele Ale, candidate for lieutenant governor.

Lt. Gov. Lemanu Palepoi Sialega Mauga, candidate for governor, at last Saturday’s Lemanu and Talauega 2020 campaign kick off at Veterans Memorial Stadium in Tafuna. Lemanu’a wife, Ella — who is active duty member of the U.S Army — is off island and wasn’t able to attend the campaign event. [photo: FS]

This joint message by Lemanu and Talauega is printed in the campaign’s kick-off glossy-color program booklet distributed to invited guests, VIPs, supporters, friends, family members, and others who attended the campaign event, which got underway around 9a.m. and lasted for more than four hours, amid drizzling rain at times — but that didn’t deter supporters.

“Our candidate for governor — my friend Lemanu — [has] humility, integrity, leadership” and is determined “to built a better American Samoa for all our people not just a select few,” said Talauega when delivering his special remarks mostly in English as he spoke first.

“There is no one more qualified to become the next governor of American Samoa then Lemanu,” said Talauega to cheers and applause from the crowd. “He had a front row seat into the operations of the government in the last 8-years. He is ready. You are ready to have him lead. You have chosen him to be leader for the last 8 years. He is not an unknown commodity.”

At the outset of his speech, the former attorney general pointed out that American Samoa’s union with the federal government has brought “countless benefits” for the territory and its people. He cited recent benefits, such as those following Tropical Storm Gita in 2018, the recent measles epidemic and the COVID-19 pandemic — and he noted the stimulus checks for those who qualify — for $1,200.

He said these are a few examples of the “incredible support and security” the territory enjoys under the American flag, but the “most important protection we enjoy as part of the American family, is the protection of our Samoan culture. That was the deal that our forefathers, our ancestors” made with the US government.

He noted that our forefathers didn’t ask for money, they didn’t ask for “special envelopes” as they asked “only for the protection of our most important treasure, our way of life — our culture and our land.”

Talauega recalled that since 1900 each generation of American Samoans has contributed into the shaping of the territorial government as well as “our union with the United States. Each generation has built and improved our democracy.”

“Like previous generations, we too stand on the shoulders of those who came before us. Our success is the direct result of their sacrifices,” he said. “What we do today, and on Nov. 3rd, will pave the way for us to build a better government so that future generations — our children — can stand on our shoulders and build an even better American Samoa.”

He acknowledged “with a grateful heart, the contributions of our ancestors, our elders, our parents — past and present” as well as government, traditional and religious leaders.

However, he said, “our work is not done and our government is by no means perfect.”  He said American Samoa’s union with the United States “continues to challenge our culture [which] makes us vulnerable to the ever changing world.”

He pointed to American Samoa’s current political status, as an unorganized, unincorporated territory and that “exposes” American Samoa to decisions made in Washington D.C. without local input.

“There is much work ahead for American Samoa to realize our full potential. That my fellow citizens, is our charge, as with every generation before us. We must take up the mantel and commit to make things better for the next generation,” he declared.

“And I know that we the people of American Samoa… are up to that challenge. I know this, because I see it in the determination of our young people. I see it in the energy of our youth. The hunger for improvement, for a better way of life, for all of us,” he said. “I hear it in the voices of mothers, fathers, throughout our land, in the calming advice of our elders... and religious leaders.”

And “I see it in the eyes of our lieutenant governor — our candidate for governor — my friend Lemanu,” he said to more cheers from the crowd,” he said.

“I believe in you American Samoa. I believe we have in us the tools, the God given abilities to build a stronger and better American Samoa, a vibrant economy... a center of commerce in the Pacific,” he said.

With the territory’s unique relationship with the U.S, “we can transform American Samoa to become a beacon in the region for medical care, the arts, education and training. I believe, we can do it,” he said.

“Lemanu and I offer ourselves [to] you the people of American Samoa to be your servant leaders in the offices of governor and lieutenant governor for the next four years,” Talauega declared.  “On Nov 3rd, I ask for your vote. Join Lemanu and me and together, we can, we will do amazing things.”

About 90-minutes later, in between performances by several committee groups, Lemanu addressed the gathering, in Samoan. He also spoke in English thanking the various local ethnic communities in the territory who came out to support the Lemanu and Talauega team.

Lemanu went on to acknowledged previous leaders and others including former Gov. Togiola Tulafono who was an invited guest, along with others, including lawmakers.

Lemanu’s wife, Ella — who is active duty member of the U.S Army — is off island. And he publicly informed his wife’s family that Ella, who has been serving in the military for 21-years, received her retirement orders last Friday and will be returning home soon.

Lemanu shared with the crowd, that in his quest to seek public office, he also looked at a number of issues — including honesty — in order to identify a running-mate, a lieutenant governor. Once that person was identified, he approached Talauega, whom Lemanu said was making $73,000 annually — the third highest paid official in the Executive Branch, after the governor and lieutenant governor.

Lemanu said Talauega gave up his post of attorney general. Talauega’s wife, an attorney by profession, was a legal counsel in the Executive branch, also resigned as the team prepared for the gubernatorial race.

Lemanu shared with the crowd that families in the territory continue to live in an ever changing world today and its many challenges  — such as “climate change” which has and will have a major impact on the territory’s resources. He said American Samoa must prepare now to protect its resources from this global issue.

“We believe in government for the people,” he said, and noted that the government serves the needs of the people. This message was clearly outlined in the campaign kick-off program booklet and was also alluded to by Talauega in his speech.

“Our government must meet the needs of our people, not the people to the needs of government. Our efforts must be inclusive of the people’s voices from all walks of life,” according to the gubernatorial team’s message printed in the program booklet. “The only way we can achieve responsible changes is if we work together and believe in ourselves and each other.”

In his speech, Lemanu said that he has heard stories of people saying that he and Talauega are too young in age and not ready to be government leaders. Lemanu points out that Biblical story of David and Goliath, where the same thinking was that David was too young.

(As the story in the Bible states, Goliath, the Philistine giant, was defeated by David in single combat.)

Lemanu said he and Talauega are prepared to lead American Samoa going forward.