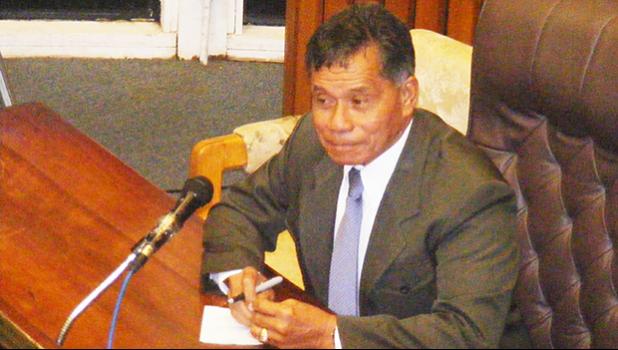 Pago Pago, AMERICAN SAMOA — The chair of the American Samoa COVID-19 Task Force, Lt. Gov. Talauega Eleasalo Ale has given the green light to the Task Force to implement plans for a special flights to enable Samoa citizens needing to renew their U.S. visas to do so.

This was confirmed by a member of the Task Force and director of the Department of Homeland Security, Samana Semo Veavea during a House hearing last week.

He was responding to Rep. Faimealelei Anthony Fu’e Allen’s inquiry whether there’s any plan for a special flight to allow residents needing off island treatment to travel to Samoa to renew their U.S. visas.

In response, Samana said that the Task Force is in the “process” of putting together all necessary information and formulating a plan for setting up a special flight from here to Samoa to serve the urgent need. Once the plan is finalized, the Task Force will put out an announcement for everyone to prepare all essential documents needed for the process in Apia.

Samana further stated that the Task Force is well aware of the request and they’re doing everything they can to make sure a solution will be in place as soon as possible.

“The Task Force is aware of the need and we want to make sure that the right protocol is being followed as we’re in the middle of this pandemic,” Samana told faipule.

It was at the beginning of last week when the Aua Faipule called for urgent assistance to allow residents needing off island treatment to travel to Samoa to renew their U.S. visas.

Faimealelei, who is a member of the Hospital Authority Board, said the previous administration allowed special flights to enable Samoa citizens needing to renew their U.S. visas to do so.

He explained that according to hospital records there are currently about 30 people needing to be referred off island for treatment due to serious health conditions. However, they are unable to travel to the US because their visas have expired.

Faimealelei said these people have lived and made their homes in the territory for decades. “They need to go to Samoa to renew their U.S. visas so they can travel off island for treatment,” he insisted. “Some of them have serious health conditions.”

He urged the House Health Committee to seek assistance on the matter.  He added that this issue should also be raised with the Governor and the Prime Minister of Samoa.

House Speaker Savali Talavou Ale backed Faimealelei’s call. He said their expired visas should not be a reason to jeopardize their health.

Last Friday during a House session, Faimealelei said that he was informed by his constituents that they have already been informed by ASG to start filling out forms and providing all documents needed for their U.S. visa renewal application and take them to the office of the Congresswoman Uifaatali Aumua Amata in Fagatogo for processing.

“This is good news for these people who have lived here in the territory for many years and consider American Samoa as their home,” Faimealelei said.

A family member told Samoa News that a woman who died of cancer at LBJ last week was a citizen of Samoa, unable to travel off island for medical treatment because her U.S. visa had expired. Two of her sons are serving in the U.S. military while her third son serves in the Army Reserve.