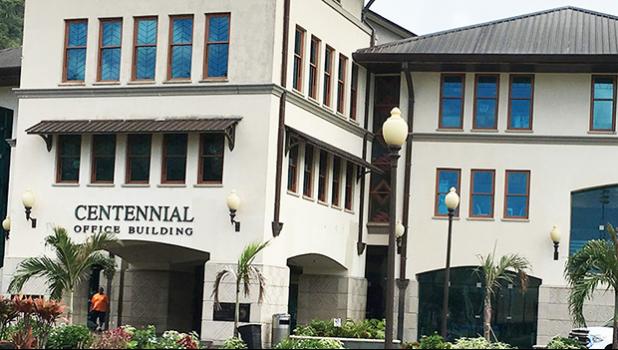 Pago Pago, AMERICAN SAMOA — The Territorial Bank of American Samoa (TBAS) is projecting a profit of “between $700,000 to one million or two” for the calendar year 2020, according to a statement by the TBAS President and Chief Executive Officer (CEO) David A. Buehler.

Buehler, along with TBAS Board Chair Olivia Reid and Vice Chair Leilua Stevenson appeared before the House Economic Development & Commerce Committee last Friday for a hearing to discuss several issues pertaining to the TBAS services for the community.

The hearing was chaired by the committee chair, Rep. Samuel Ioka Ale Meleisea.

Buehler explained to the committee that from 2016- 2019 the loss was approximately $4.5 million but things changed in 2020. Despite still being under audit, “it looks like we’re somewhere between $700,000 to a million or two profit.”

Enquiries regarding the bank’s profit were based on reports received by lawmakers during the 36th Legislature, including the balance sheet reports from TBAS as of October 2018, which stated that “TBAS has an accumulative loss of $3,705,874 since its inception from October 2016 through September 30, 2018.” During the time lawmaker received the report, which was Feb. 2019, “TBAS has projected or budgeted a monthly loss of $178,000 with a total loss of $2.1 Million at the end of the fiscal year, 2019.”

The law which established TBAS stated, “The Bank shall prepare and file annually with the Governor, the Legislature of American Samoa, and the Office of Financial Institutions, within 120 days after close of its fiscal year, a report of its condition sworn to by the CEO and the Chairman of the Board.  This includes the Audited Financial and Profit and Loss Statement of the bank.”

The law also provides that this report shall also be made available to the general public by publication or otherwise.

In addition, “The Bank shall prepare and file quarterly with the Office of Financial Institutions, within 30 days of the end of each calendar quarter, a report substantially in the form of the Consolidated Report of Condition and Income as required by the Federal Financial Institutions Examinations Council.”

Buehler highlighted good news to the committee when he was given the opportunity to explain the bank’s current situation. He said that 2021 is turning out to be a great year for the TBAS. Economic Impact Payments (also known as stimulus checks) have helped TBAS grow its assets, deposits and loan portfolios as well as its profits.

Getting the TBAS to be insured by the Federal Deposit Insurance Corporation (FDIC) is a must, however, according to Buehler, as long as the bank is owned by the government it is not eligible to be insured by FDIC. So, part of their strategic plan is to privatize the bank in order to meet this requirement.

When asked by committee members to reveal any future plans, Buehler said it will probably be one or two more years before they target local investors for the bank.

TBAS Board chair, Reid echoed the CEO’s statement and said that in the meantime, TBAS is able to manage internal insurance up to $250,000 per EIN. She said that even though people’s money is not insured by FDIC, it’s covered by other private insurers.

Rep. Avagafono Vaimaga Maiava said that FDIC is a big issue and this is one of the reasons why people go to the ANZ Bank to do banking and have their bank accounts there rather than at TBAS. He wanted to know what the Fono can do to help TBAS privatize.

Buehler said the one factor that may come up in the process of privatization is there may be a chance for the Fono to review the statue that established the bank because the statue for a private bank requires FDIC insurance. He stated that maybe the Fono needs to adjust the statue just for this particular situation.

Swains Island Representative Su’a Alexander Eli Jennings said that it is interesting to hear the contradiction between the legal opinions of FDIC and the TBAS where FDIC says as long as it’s owned by the government we won’t get insurance while the TBAS legal opinion says it doesn’t belong to the government.

Su’a said, “This is a strong argument to be denied insurance because of the ownership and yet we can’t provide retirement for our people (referring to TBAS employees).”

Buehler said he was not present in the beginning of 2016 when the bank opened but he went through the files and it’s clear to him and the management that the original intent for creating the bank was to take the place of Bank of Hawaii until the territory can privatize the bank. According to Buehler, they’re still following that intention and TBAS is heading in that direction.

Buehler told the committee that TBAS got an opinion from their legal counsel after reviewing the statue that exists for the retirement fund which indicated that “TBAS employees are not government employees the way it’s structured and because of that we’re not eligible to have them participate in the government retirement fund plan.”

However, according to Buehler, TBAS has executed another plan and they’re working on a private plan where they’re looking at four vendors, all big names.

“We’re looking to have this new plan in place by April 1st,” Buehler said, adding that, “any of the funds returned to us from the retirement fund will be allocated back to those employees once this new program is up.”

Speaking about the retirement fund plan for employees, Rep. Faimealelei Anthony Fu’e Allen said that the funds that went to establish TBAS was the people’s money. He further stated that if “TBAS is owned by the American Samoa Government (ASG)”, then all employees working for TBAS “are government employees and should be eligible for the government retirement fund.”

Buehler said that the way TBAS was structured according to the statue is totally separate from the ASG. He said ASG only owns the stock of the bank.

Faimealelei said that this is something that lawmakers and TBAS officials need to tackle in the future. Looking back at the time TBAS was established, a lot of the private sector wanted to get involved and invest. They were given the opportunity, however, all of a sudden they didn’t come up with the funding and that’s why ASG jumped in.

“My concern is the people working for TBAS and their future. I know you had a retirement plan for them but we need to take this issue very seriously because of the future of our people working there,” Faimealelei said.

The Master Card program is quite a success. According to the TBAS CEO, they received information from the American Samoa Telecommunication Authority (ASTCA) that their cards has being used all over the world and they’re very pleased with the fact that they have a card that’s working. There was never a phone call from anyone complaining about the cards.

Aside from the Master card, Buehler told the committee that they also have a consumer card which had over $9 million in transactions since its roll out in August of last year, while the business card was launched in October of last year.

“Today (last Friday), we have like $15,000 transacts going through cards, so, they’re being used,” Buehler said.

The ATM Service is one of the banks successes, and includes 15 ATM machines throughout the territory including one in Manu’a and 14 on Tutuila. They’re planning to install another 3 machines, one for Manu’a and another 2 for Tutuila.

Manu’a #1 Representative, Alumamalu Ale Filoiali’i commended TBAS for their services for people of Tutuila and Manu’a. He told Buehler that people living in Manu’a really need the ATM service because “that’s the only source of getting money for them.”

The TBAS CEO told members of the House Committee that the Economic Development Revolving Loan Fund for business loans for new and existing small businesses is up and running.

Small businesses needing capital to start up and/or expand may borrow up to $250,000 repayable over a maximum term of ten years at a favorable interest rate. The minimum loan amount is $1,500.

He said that TBAS continues to support business in American Samoa through developing new and innovative banking products that assist our future and existing business owners to have the proper capitalization to support profitability.”

He added, “We have all had a very challenging 2020, so providing a new business credit product with the assistance of a US Economic Development Administration (EDA) grant sponsored by ASG Department of Commerce (DOC) is an important initiative to enable American Samoan businesses to become established and grow.

To date, TBAS has received 4 applications for the business loan program and the bank is willing to assist the small businesses community.