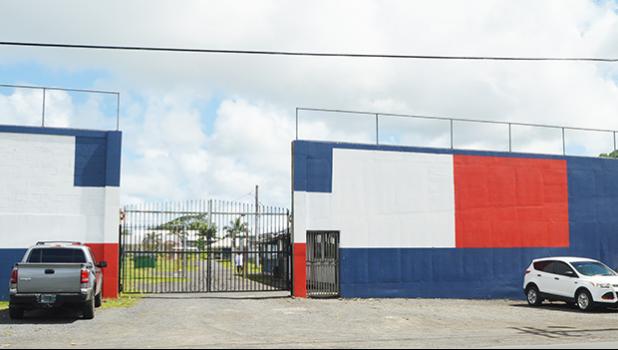 Pago Pago, AMERICAN SAMOA — Several police officers rushed in response to an incident at the Territorial Correctional Facility (TCF) when a group of inmates engaged in a fight inside the compound over the weekend.

Police got the matter under control and immediately started their investigation, which was followed by an immediate raid of the facility compound which was carried out by detectives from the DPS Vice and Narcotics Unit (VNU), along with detectives of the Criminal Investigative Division (CID) in an effort to find more evidence on the incident.

Drugs were discovered during the raid.

This was confirmed by TCF Warden and former Deputy Commissioner, Falana’ipupu Taase Sagapolutele during a telephone interview this week.

Falana’ipupu told Samoa News that the CID is now taking over the investigation regarding the alleged assault; while VNU is handling the issue pertaining to drugs allegedly found in one of the cells during the raid.

According to the TCF Warden, two inmates are now being questioned by investigators regarding the two separate incidents and they are expected to appear in Court later this week, once the government finalizes the charges against them.

“You will get all of the details you need about what exactly happened in TCF when the case is filed in court and the two inmates officially charged,” Falana’ipupu said, adding that there is no further comment regarding the incidents, because both matters are now being investigating by police.

Samoa News will give an updated report later this week based on the status of the two inmates — they appeared in court yesterday.

An inside source told Samoa News that the fight was alleged to be between inmates from Le Aute and the Le Filifili against inmates from Vaitogi including the Siaumau brothers.

A fight between inmates from Le Aute and Le Filifilii against inmates from Vaitogi immediately erupted as a result of the alleged beating, however, TCF officials were able to calm the incident and immediately informed the Fagatogo Central Station about the situation.

A family member of the inmate who was injured in the shower as a result of the alleged assault confirmed the incident to Samoa News, saying that the incident did not sit well with the family.

The family member said that according to the report they received, the inmate that allegedly initiated the assault was supposed to be locked in his cell, however, it’s not clear at this time how this inmate was able to walk out of his cell and assault the victim.

The family member of the injured inmate further told Samoa News that their family is still trying to absorb what happened. They need to investigate the matter more before taking the first step because their family member was injured while under the protection of the government.

“This incident was not supposed to happened, however, it appears from the information our family received that this was a set-up mission to assault the victim. Our family needs to get to the bottom of this matter before taking another action.

“Our family needs justice for our family member who is serving his detention in TCF under the protection of our government, however, its appears that TCF is no longer a safe place for any inmate,” the family member told Samoa News.

Samoa News asked the Police Deputy Commission Falana’ipupu about the allegation that the shower assault was a planned incident — which he denied. He said the incident was just a regular fight between inmates over something between them.

He also denied the allegation that the injuries the inmate sustained in the shower were caused when he was struck by another inmate with a chain.

Falana’ipupu said it was after the alleged assault that he then requested a police raid into the cell of the inmate allegedly involved in the assault in an effort to locate any evidence that related to the incident.

And, it was during the police raid that drugs and drug paraphernalia were allegedly discovered inside the inmate’s cell.

Falana’ipupu confirmed that the CID was handling the assault matter while detectives of the VNU were investigating the drugs found in the cell.

Drugs inside TCF and the assault of other inmates has continued to be a problem within the facility for many years now, with how drugs are entering the TCF remaining the focus of both the police and the court.

Currently, despite building a “high” wall around the facility, inmates are still testing positive for methamphetamine and marijuana.

Last Friday, Chief Justice Michael Kruse questioned Deputy Commissioner and former Warden, Foifua Foifua Jr about drugs getting into TCF during a revocation hearing for two inmates accused of violating conditions of their probation. Sierra Isaia tested positive for meth, while Sonny Mu Kelemete was not present for a drug test upon demand from probation.

Prior to the wall being built, at least three other inmates tested positive for meth and are currently serving jail time for drug convictions.

There is also a case pending in High Court of a woman who tried to smuggle a package containing a huge quantify of crystalline substance into TCF. A TCF guard and an inmate are also charged in this case.