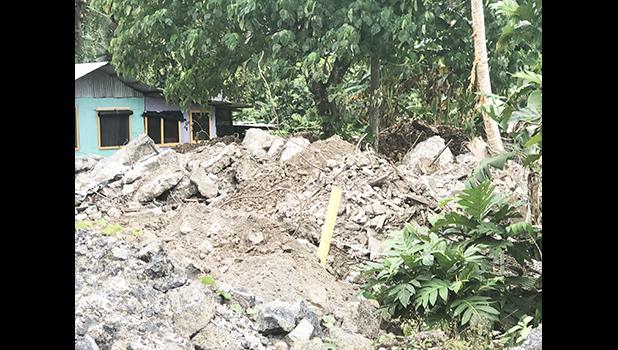 Pago Pago, AMERICAN SAMOA — A lawsuit was filed last week against Faumuina John Faumuina, his nephew, James Faumuina and two local construction companies for the alleged illegal dumping of solid waste and construction materials at the confluence of the Malaeimi stream and the Nu'uuli streams on individually owned land called "Vaitele" in the area across the main road from the Shoe Tree.

The combined streams become the largest flowing stream into the Pala Lagoon through the area by the Territorial Correctional Facility, according to information shared with Samoa News. And the area of the alleged illegal dumping can be accessed through the driveway on the left side of the Coco Mart store on the Airport road across the bridge at the Airport intersection with the main road.

“This is of critical environmental concern because this area floods with some regularity and any such flooding is going to release whatever is in that rubbish and affect everything downstream into the protected Pala Lagoon,” said local attorney Charles Alailima, who filed the lawsuit with the Land and Titles Division of the High Court.

Plaintiffs in the case are: Faitala Taufete'e — son of lakopo Taufete'e and currently living in Nevada and restricted from returning to American Samoa due to COVID-19 travel restrictions the territory; Tafuaupolu Taufete'e, another son of lakopo Taufete'e who currently resides in California; and Sese Saua, who resides on a portion of "Vaitele" individually owned land at  issue in this action and the adopted child of Iakopo Taufetele and his wife — who are both deceased, according to the complaint.

The lawsuit provides the history of owner of the 7.97 acre parcel of land which was recorded and registered in 1948 as individually owned land by its original owners. The land was later divided in the 1960s and the complaint detailed how this was done and the descendants receiving the divided land.

There were changes over the years also explained in the complaint, which points out that the division of the Vaitele land has been respected by the descendants until around the first part of April this year when Faumuina John and James Faumuina surveyed a portion of "Vaitele" land which is occupied by the plantation maintained by plaintiff Sese Saua and her family.

On April 15, 2020 Faumuina John “executed a document purporting to be some kind of transfer deed over the surveyed portion of the land and also filed it with the Territorial Registrar, who then recorded it immediately without notice to any of the plaintiffs.

Then on Apr. 30th, James Faumuina applied for a permit to fill the land after plaintiffs, through counsel, complained to the ASG permitting agency that loads of dirt  were being placed on the property for filling.

Around May 14th, plaintiffs became aware of the pending application for permitting and through counsel, objected, both challenging the legal authority of James Faumuina to claim ownership of the land and objecting to the filling on "Vaitele" individually owned land.

Plaintiffs, through counsel, became aware of the existence of the April 15th recording at the Territorial Registrar and submitted the challenge to the recording on June 22.

Alailima in his June 22nd challenge also requested the Territorial Registrar to conduct a “serious investigation” into “how and why such a recording was even allowed to happen without the slightest regard to the statutory procedures and the rights of the person to whom the land was registered,” according to a copy of the letter included as an exhibit in the complaint.

Despite plaintiffs’ objection, James Faumuina, was issued a Land Use permit for filling the land in question, according to the complaint, noting that some of plaintiff’s, Sese Saua, crops were destroyed by the filling before her husband was physically able to intervene by placing their vehicle in a position to block the tractor from bulldozing the already placed piles of dirt in the plantation.

However, the defendants continued to fill land on "Vaitele" and did so by using rubbish, metal, and large concrete construction debris intermixed with some soil of unknown origin.

And such deposits of rubbish, metal and construction and metal debris “are a short and long term threat to health and safety not only to the people occupying "Vaitele" but also to the surrounding neighbors as the area being filled is subject to significant flooding,” the complaint alleges.

While the ASG Project Notification Review System (PNRS) board issued in May this year a land use permit to James Faumuina, the board on Aug. 27th issued a “stop work order” for “violation” of conditions of the land use permit, according to separate documents filed in the case.

The complaint outlined summary details of plaintiffs’ three-causes of action:

•     James Faumuina, has no legal authority to undertake a land use permitting process that substantially alters the individually owned land "Vaitele".  And any Land Use Permit issued to James Faumuina is void.

•     tort damage to real property by all defendants.

Under the tort cause of action, the complaint said James Faumuia, Paramount Builders and Happy Trucking know that their action was illegal dumping as it is specifically stated in the James Faumuina Land Use permit upon which they rely — that such dumping is forbidden.

Furthermore, Paramount Builders and Happy Trucking are well established in the business of construction and know that materials of the sort being dumped at the  site are required to be disposed of at the government disposal facility in Futiga.

Additionally, the "Vaitele" land floods regularly and surrounding will be permanently damaged without the immediate and complete removal of the restricted materials.

Plaintiffs request the court for an immediate temporary restraining order issued to defendants directing that  they cease any further filling upon the land "Vaitele" pending hearing on an order to show cause.

The court is also being asked:

•     declare that Faumuina John and James Faumuina, have no legal right to undertake authority over the land "Vaitele" under either the April 15th, 2020 recording with the Territorial Registrar or the Land Use Permit for the filling of the land;

•     defendants be required to undertake at their own expense the restoration of the land to the status as such existed on April 15, 2020;

•     plaintiff, Sese Saua, be awarded specific damages for the value of her crops that were destroyed by defendants' actions as may be shown at trial.

•     punitive damages be imposed against all defendants, jointly and severally for the clear violation of the Land Use Permit granted and the intentional damage to the "Vaitele" property in the amount of $1,000,000 or such amount as the court  finds appropriate and just.

The defendants are expected to file a response in the coming days.