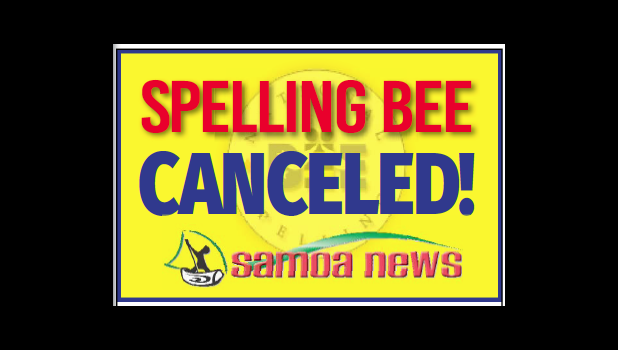 Pago Pago, AMERICAN SAMOA — After deciding to err on the side of caution, Samoa News announced the cancellation last week of the upcoming March 25 Territorial Spelling Bee.

"It is with a heavy heart that Samoa News canceled the 2020 Samoa News Territorial Spelling Bee in light of the risk to the health and well being of the participating young students, their parents, and all those involved in the televised Bee. We join the territory and the nation in prayers that we will all take care of each other in this time of dire need. God bless," said Robin Annesley Dalton speaking for the Samoa News staff and management.

Since the cancellation, Gov. Lolo M. Moliga has issued an amended directive calling for a Code Blue coronavirus response for America Samoa, which now includes closing all public and private schools and ASCC —  as well as suspending all public gatherings until further notice.

The Territorial Spelling Bee is Samoa News’ major community service activity. The state, national and territorial bees are all sponsored by their community newspapers with the champion of each sponsor’s final spelling bee advancing to the competition that is held in National Harbor, Maryland, just outside of Washington D.C.

Samoa News at the urging of Evelyn Lili’o-Satele instituted the Territorial Spelling Bee here in America Samoa in 1995.

“With almost all public and private schools participating in the bee each year, statistics show our kids testing scores in spelling have improved with an upward curve greater than in English or math,” Dalton said.

On Friday afternoon Samoa News received word from the Scripps National Bee, that the annual event had been suspended.

“We are suspending our 2020 national finals. The Bee recognizes the important responsibility to take action that protects the health and well-being of its participants including the spellers, their families, the local sponsors, employees of The E.W. Scripps Company and others who support the event known as Bee Week,” the organization said in an email to all the sponsoring newspapers.

According to Associated Press, Scripps also cited state and federal recommendations against large gatherings as it canceled plans to hold the contest during the week of May 24. Scripps said it would try to reschedule for later this year but did not commit to a new date. It’s possible the bee won’t be held at all.

“My heart goes out to all the spellers,” said Bee executive director Paige Kimble, herself a former champion. “I’m almost 40 years removed from my speller days, but I can still keenly recall how hard I worked for, dreamed about and anticipated the national finals. We are going to do our best to make something happen in spite of the constraints that COVID-19 is imposing on all our lives.”