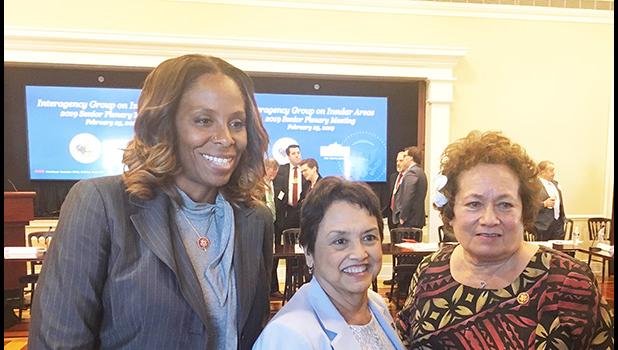 Washington, D.C. — Congresswoman Uifa’atali Amata worked with sponsor Congresswoman Stacey Plaskett, colleagues from the Territories and other key Members of Congress in introducing legislation together to better provide equitable treatment for U.S. territories in federal health care (programs like Medicaid and Medicare), named the Territories Health Equity Act of 2021 (H.R. 3434).

The bill would address existing inequalities for the territories under Medicaid, Medicare, and other federal health programs. Importantly, the bill will provide territories with their equitable share of federal funding for Medicaid beyond the upcoming “fiscal cliff” when much of the existing funding for the territories is scheduled to expire at the end of September, 2021, with the close of the fiscal year. Original cosponsors of the bill include Reps. González-Colón, Aumua Amata, Sablan, San Nicolas, Soto, Velázquez, Grijalva, Pressley, Clarke, and Torres of New York.

“Working together, the territories have made important strides forward in ensuring Medicaid availability in recent years,” said Congresswoman Amata. “We need to continue that progress to gain the full parity with Medicaid and other benefit programs that our people deserve.”

“People in the territories should have just as much access to health care as anyone else. In the midst of global pandemic, with more federal attention on how health care funding disparities have had a deleterious impact on the finances of local governments and hospitals in the territories, we believe that this is an opportune time to press for equity in Medicaid and Medicare,” stated Congresswoman Plaskett. “The inequities in federal funding provided to the territories for Medicaid and Medicare has put access to affordable health care out of reach for too many Virgin Islanders, making our hospitals’ emergency rooms the primary health care provider for the one-third of our population without health insurance, which contributes to unmanageable costs in uncompensated care.”

“Millions of Puerto Ricans depend on Medicare and Medicaid programs to cover their healthcare needs. Our territorial status doesn’t allow beneficiaries to have access to the same programs and benefits and our healthcare providers to receive the same pay as those living stateside,” stated Congresswoman Jenniffer Gonzalez Colon. “This bill is necessary to correct these inequities and improve the wellbeing of people in all five U.S. territories, while also eliminating the ‘Medicaid cliff’ that burdens the healthcare and government sectors.”

“The Territories Health Equity Act will correct long standing health inequities in the U.S. insular areas that are only made worse by chronic underfunding,” stated Congressman Gregorio Sablan. “I thank Delegate Plaskett for incorporating the text of my bill, H.R. 265, which would avert the fiscal crisis Medicaid programs in our jurisdictions face when supplemental Medicaid funding ends in September.”

"Healthcare equity for our Territories is fundamental to the premise that all Americans, regardless of where they live in this country, should be afforded full federal support,” stated Congressman Michael F.Q. San Nicolas. “If we are to further believe that healthcare is a right and not a privilege, then surely the support of full Medicaid inclusion for those without privilege must be made right."

“American citizens living in U.S. territories deserve the same access to healthcare as those living in the mainland,” stated Congressman Darren Soto. “The current system puts a strain on the territories’ Medicaid programs, like in Puerto Rico, during a time when they need more support than ever. Our bipartisan bill will eliminate unfair Medicaid funding limits for U.S. territories and make it easier for individuals to receive necessary coverage.”

“Healthcare is a human right, and the equitable distribution of that healthcare must be at the forefront of our legislative priorities on the mainland, and throughout U.S. Wherever and whenever an opportunity exists to overcome these inequities, to protect and preserve an individual’s right to quality healthcare, we must seize it,” stated Congresswoman Yvette Clarke. “I am proud to stand alongside Rep. Plaskett as she reintroduces this critically important legislation because let me be very clear, citizens of U.S. territories are Americans, and they deserve to be treated as such. Full stop.”

Among other things, the bill:

• allows residents of U.S. territories to be eligible for low-income

subsidies under the Medicare prescription drug benefit; and

•  allows residents of U.S. territories who are unable to obtain health insurance through their employer or a health insurance exchange to instead access marketplace insurance coverage that is available to Members of Congress and congressional staff.