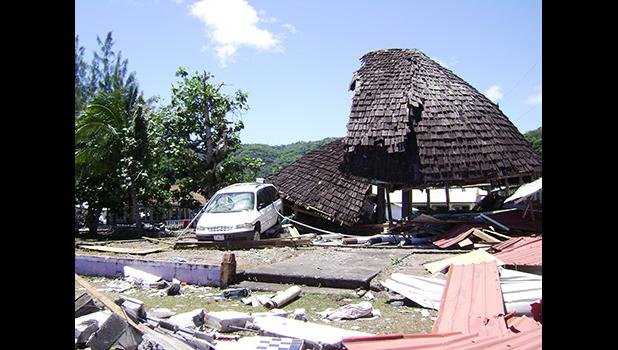 ASG will observe a half day today
By
Fili Sagapolutele
fili@samoanews.com

Pago Pago, AMERICAN SAMOA — Gov. Lemanu Peleti Palepoi Sialega Mauga has ordered all flags in the territory to be flown-at-half staff today and that ASG will observe a half day today — marking the 12th anniversary of the deadly Sept. 29, 2009 tsunami that claimed the lives of 34 people in American Samoa.

“We will never forget the horrors that transpired that day,” said the governor in his order,  made through a memorandum dated yesterday and released late in the afternoon by the Governor’s Office. The governor also encouraged all ASG departments, agencies and authorities to hold a prayer service.

Sept. 29, 2009, “serves as a remembrance of the lives we lost on that September morning,” Lemanu points out. “More than ever, we committed to moving our territory towards greater resilience in the face of future events. May we all continue to be vigilant in our preparations of natural disaster.”

As the sun shines on the mountains in the background, this Samoa News file photo, shows high water in the parking lot of the Post Office, during the Sept. 29, 2009 tsunami in American Samoa. [photo: Samoa News file]

“While we remember those we lost and recalled the devastation of that tragic day, may we never forget that in moments of crisis and uncertainty, there is always hope,” he points out.

On behalf of Lt. Gov. Talauega Eleasalo V. Ale “and our families, we thank our first responders and all the heroes who tirelessly strengthen our Territory’s ability to prepare for, protect against, respond to, and recover from natural disasters,” Lemanu said.

“We thank you for your commitment to serve our Territory,” he noted. “As we reflect upon this tragedy, the lives lost and the impacts on the affected survivors, let us each to take a moment to be grateful for the Lord’s enduring protection and blessings on our Territory.”

This Samoa News file photo shows high water from the Sept. 29, 2009 tsunami between the Market Place in Fagatogo and one of the parking areas near the boat dock. [photo: Samoa News file]

Last year, due to COVID-19 restrictions, there was no official government ceremony, as its also expected this year, while those who lost loved ones will hold their own memorial services

Names of the 34 victims of the Sept. 29, 2009 tsunami — the worst natural disaster in American Samoa’s recent history — are listed at a memorial monument at Hawaiian Airlines Tsunami Memorial Picnic Shelter at Lions Park. And members of the Rotary Club of Pago Pago are expected to lay a wreath at the site.

This Samoa News file photo shows debris and a damaged Samoan fale in the village of Leone just hours after the Sept. 29, 2009 tsunami in America Samoa. [photo: Samoa News file]

Today is also the finale of American Samoa’s “Tsunami Awareness and Preparedness Week”, which started on Sept. 23rd.  The local Homeland Security Department (ASDHS) and its local partners have conducted educational and outreach programs not only for the tsunami awareness week but also national preparedness month which is September — at certain shoreline schools and on radio.

These two events will closeout today, as ASDHS and its partners, will hold a “wave” on the roadside in front of the Territorial Bank of American Samoa branch in Tafuna starting at 9a.m. today.