Thanks to McDow, two school crosswalks are becoming safer 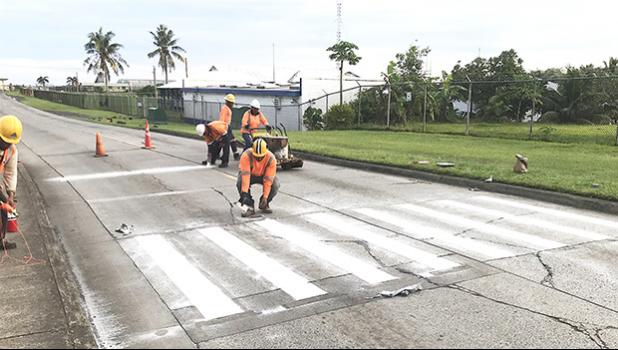 Pago Pago, AMERICAN SAMOA — Crewmembers from McConnell Dowell-American Samoa pictured this week re-striping the crosswalks in front of South Pacific Academy (SPA). The team plans to complete similar work at the road in front of Pacific Horizons School (PHS) in Ottoville as soon as weather allows.

Yesterday, Rep. Larry Sanitoa wrote to Stan Schwalger,  the company’s acting country manager, expressing his sincere gratitude to Schwalger and McDow on behalf of the students, parents, and teachers of SPA and PHS, as well as residents of Ottoville - and motorists - for the company’s continued community service.

“Fa’amalo fa’afetai tele lava for donating your time and resources to re-stripe the crosswalks in front of SPA school and at PHS,” Sanitoa wrote. “Thank you as well for donating loads of recycled asphalt to help with repairs to several side roads within the Ottoville area.”

“Time and time again,” continued the Tualauta faipule, “McConnell Dowell has been an exceptional corporate citizen by generously offering to support and assist with numerous community infrastructure projects and school improvements especially in our Tualauta district.”

“Stan, many thanks again for your commitment and willingness to help our communities, especially the Tualauta District. McConnell Dowell has certainly become a recognized name in many households for their contribution towards improving the infrastructure in our territory,” he concluded.