There is Power in Partnership! 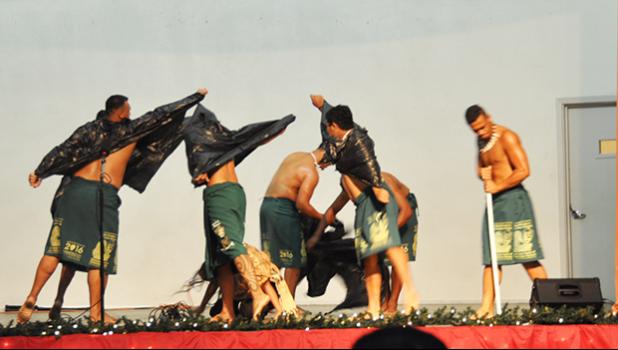 The Cabinet of the American Samoa Government had a rare treat during their December meeting this year. It was during their luncheon work meeting, which was held at the Gov. H. Rex Lee Auditorium on December 14 that members of American Samoa’s National Park Service (NPS) gave the Cabinet an unusual performance, meant to be both entertaining and enlightening.

With a unique mixture of art and science, employees of American Samoa’s National Parks combined song and dance with cultural storytelling, displaying for the Cabinet an innovative method with which to teach English, science, cultural history and the wonders of our National Park.

Utilizing original material written by UH professors Ron Turituri and Mene Tauaa and performed by American Samoa NPS employees, the group drew upon Samoan legends and chiefly oratory, and wove it together with science lessons  in this case, science lessons gleaned from studying the native fruit bats (pe’a) of the Territory.

The University of Hawaii instructors enjoyed watching the performance along with Namulau’ulu Tofilau Tavita Togia, American Samoa’s NPS Terrestrial Ecologist, who had collaborated on the piece, as the park rangers sang and danced their ecology lesson for the leaders of the Lolo administration.

According to Dr. Deborah Zuercher of University of Hawaii, Manoa College of Education, the National Math and Science Initiative (2017) predicts that the U.S. will need one-million more STEM professionals over the next decade than it is projected to produce at the current rate.

In response to the Governor’s STEM education request, University of Hawaii educators and the National Park of American Samoa rainforest scientists created a partnership designed to enable students of the Territory to meet those national workplace needs.

With that in mind, the UH professor noted that UH is excited to offer a Master’s Degree program with a STEM focus beginning in January 2018, and it will bring together NPS rangers and ASDOE elementary and secondary teachers from Tutuila and Manu’a.

Two of the eight courses required for this nationally-accredited Masters degree program will be paid for with a National Science Foundation grant that UH received to promote STEM education in the Pacific, making this opportunity an exceptional value, and ASDOE Director, Ruth Matagi-Tofiga has approved the UH promotion of this graduate degree program.

The great scientist Albert Einstein said, “We can’t solve problems by using the same kind of thinking we used to create them.” Combining scientists and educators in STEM classes is an innovative way for Pacific leaders to collaborate to solve Pacific problems, and lessons presented using Samoan cultural arts makes it all the more memorable for the students.

In order to accomplish this task, NPS Terrestrial Ecologist Namulau'ulu Tavita and UH instructors Turituri and Tauaa formed a collaborative partnership in 2017. The idea was to pilot the creation of place-based STEM integrated lesson plans about the Samoan Fruit Bat.

With this first successful collaboration under their belt, the scientists and educators in American Samoa plan to continue to write these types of original, place-based and culturally-responsive lesson plans and books—all featuring the plants and animals in American Samoa.

Evelyn Lili’o-Satele, currently serving as Director of the Territorial Administration on Aging, was present at the Cabinet meeting. A life-long educator, she is a former science teacher and school principal, and noted that she thoroughly enjoyed the presentation.

She told Samoa News, “For so long, we have taught children from a curriculum that was developed for students residing in the US.  For example, we would ask, ‘Why does it snow in Alaska?’

“Perhaps we should also be asking, ’Why doesn't it snow in Samoa?’ Place based curricula brings it home. Our students can identify with bats and legends as seen in the presentation. It makes learning — and teaching — real, and increases student’s ability to retain the things they have learned.  I look forward to seeing a performance by students and teachers.”

Namulau’ulu Tavita Togia, who is also the NPSA-Governor's Office Invasive Species Project Leader, earned his Bachelor in Science degree at UH Hilo and his Master’s Degree in Educational Leadership from the University of Hawaii at Manoa. He understands the merit of connecting science and education for the conservation of American Samoa’s natural resources and culture.

Namulau’ulu Tavita introduced the Fruit Bat performance to the Governor’s Cabinet with these words:

“The National Park and our conservation partners thank the Honorable Governor Lolo Moliga, Lt. Governor Lemanu, Chief of Staff Fiu Saelua and the entire cabinet for the opportunity to showcase the place based and culturally responsive conservation curriculum created by the University of Hawaii – College of Education and the National Park of American Samoa. There is power in partnerships!”

He reminded the assembled leaders, “We joined forces with the Governor’s Office to restore our islands’ biodiversity by removing invasive species, rehabilitating wetland ecosystems and establishing climate research across Tutuila and the Manua Islands.

“With the support of Governor Lolo Moliga, we obtained over $1 million federal funding to reclaim and protect more than seven thousand acres of Samoan rainforests. Our performance with the University of Hawaii today illustrates our new initiative to transform science to education so that we can develop the next generation of local stewards to maintain Le Tofi o Samoa, o lona fanua ma le lauele’ele.”