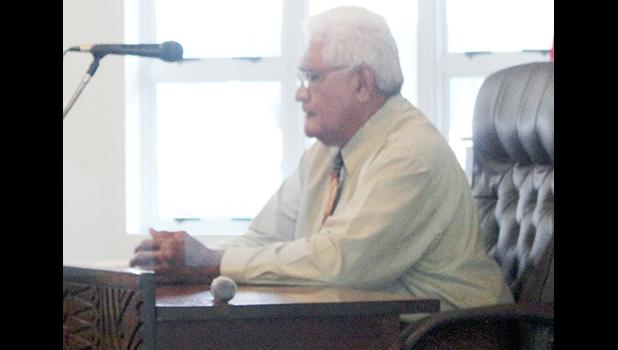 NOTES OF INTEREST FROM CONFIRMATION HEARINGS
By
Fili Sagapolutele
fili@samoanews.com

Pago Pago, AMERICAN SAMOA — Three more cabinet nominees submitted by the governor have been confirmed by the Senate while confirmation hearings and votes in the House of Representatives remain pending.

Yesterday, the Senate approved — in a 16-2 vote — Kenneth S. Tupua as director of Parks and Recreation, while it was a unanimous 18-0 vote for Taotasi Archie Soliai as director of the Department of Marine and Wildlife Resources.

Last Friday, the Senate approved in a 14-2 vote Christopher King as director of Port Administration.

PARKS & RECREATION — PUBLIC PARKS COULD BE CLOSED ON SUNDAYS

Tupua who served as director for the same department in the previous administration appeared yesterday for his confirmation hearing before the Senate Parks & Recreation Committee, chaired by Sen. Tauiliili Lauifi Paopao.

In his opening remarks Tupua said, “I ask for your vote of confidence to run” this department.

One major issue raised during the 30-minute hearing, started off with Sen. Fonoti Tafa’ifa Aufata who voiced her ongoing concerns with public parks, filled on Sunday with swimmers, people playing games and gathering together.

Sen. Soliai Tuipine Fuimaono acknowledged Fonoti’s concern and pointed out that many costal villages have already banned swimming on Sunday and this is also being done by his Nu’uuli Village Council.

Soliai suggested appropriate legislation that bans swimming and other activities at public parks on Sundays.

Sen. Fano Shimasaki asked for the time Fagaalu Park is open and closed, saying that even though work has not been completed for the Samoan fales, people are already using them — even throughout the night.

Tupua responded that the rule is opening time is 6a.m and closing time is at 10p.m. He also said these are public parks meant for the public to use and it’s the department’s responsibility to keep the parks safe and clean.

Sen. Satele Galu Satele opposes the use of public parks on Sundays for any type of activities, saying that Sunday is a day of rest and to be observed by all. He suggested that Parks and Recreation come up with set policy.

Sen. Fai’ivae Iuli Godinet told the director-nominee that swimming and other uses of public parks on Sunday is not an easy issue for the department to deal with. However, he wondered out loud if this issue is not so different from that of those playing golf all day on Sundays.

At the start of his confirmation hearing before the Senate Fisheries/Marine & Wildlife Resources Committee chair by Sen. Fano F. Shimasaki, Taotasi noted that he has worked in American Samoa for nearly 30-years and this includes the private sector — the most recent was at StarKist where he stepped down last year.

Taotasi Archie Soliai appeared yesterday morning before the Senate Fisheries/Marine & Wildlife Resources Committee for his confirmation hearing as director of Marine and Wildlife Department. He was later confirmed in a unanimous 18-0 vote. [photo: FS]

He has been acting director for the last two and half weeks and that very soon his department’s fiscal year 2021 budget — which is 90% funded by federal government — will come before the Fono for review.

Towards the end of the confirmation hearing, Taotasi responded to some of the issues raised by the committee, for example the status of the upgrade to the Malaloa Marina, which broke ground last year.

He said this project is overseen by Port Administration and DMWR works in collaboration with Port on this project.

The senators who raised this issue said they have not seen any new development for this project, which received funding from the fine StarKist paid to the federal government for violation of federal laws in territorial waters.

On the committee question regarding the Super Alia project, Taotasi said this project is overseen by the Commerce Department and DMWR will work with DOC to ensure Manu’a is included in this project. (See Samoa News edition Dec. 8, 2020 on the latest update of the project with funding from the federal government.)

There were senators who called on DMWR to enforce local fishing laws, to which Taotasi requested public assistance, including the Office of Samoan Affairs to report such incidents. He said the public is onsite and knows what happening.

As to getting accurate fishery data for submission to the federal government, Taotasi said collection of data is a big challenge as there is a conflict between DMWR and the US National Oceanic and Atmospheric Administration on this issue.

Taotasi — who is also the current chair of the Western Pacific Regional Fishery Management Council — is well versed on this issue and said such conflict affects federal funding for America Samoa.

He pointed out that he was providing a summary response but can return to the Senate to provide details in the future.

PORT ADMINISTRATION — A TRAINED WORKFORCE ABLE TO DO THE WORK

King appeared last Friday morning before the Senate Transportation/ Port & Airport Committee chair by Sen. Malaepule S. Moliga for his confirmation hearing. Several senators praised his background and experience, especially since he has been with the department for 25-years.

Christopher King shakes hands with senators following his confirmation hearing last Friday before the Senate Transportation /Port & Airport Committee as director of Port Administration. He was later confirmed in a 14-2 vote. [photo: FS]

Sen. Fonoti Tafa’ifa Aufata, the first to ask questions, inquired about the wharves for Auasi and Aunu’u, to which King explained that the two ports need a lot of work. He said the infrastructure on those docks needs to be built up “so we can maintain the safety and security of those ports, Aunu’u particularly.”

He said the Aunu’u dock was probably built back in the 1970s and redone in the 1980s. Additionally, the ports need upgrades so that the alias can safely travel between the two ports.

And “this is something on our list to do, to make sure that all of our ports — including Tau, Faleasao, Ofu and Pago Pago are secure enough and the infrastructure is solid to use those port safely,” he said.

Responding to a follow up question from Fonoti, King said Port Administration just received a grant from the US Maritime Administration to address all harbors in the territory and “we’re going through the legal process now.”

“So I’m hoping that probably, in the next three months or so, we should be able to draw down those funds” for the work at all harbors, he said.

Sen. Satele Galu Satele recommended towards the end of the hearing for Port Administration to look at a safe vessel to sail directly from Aunu’u to Fagatogo to ensure the safety of travelers at all times.

Sen. Utu Sila Poasa, who years ago served at Port Administration, recalled that he hired King 25-years ago and King start about 1996. Utu said he left Port in 1997 and had given King a master plan to carry out.

“What happen to our master plan, which was a five-year plan. The first five-years, we should have a jet-way at the [Tafuna] airport,” said Utu adding that there should also be a two-story building at the airport.

If fully confirmed by the Fono, Utu asked King to have a jet-way at the airport before the end of four-years. “Go back to the drawing board and find out what happened with the jet-way,” said Utu.

Sen. Fai’ivae Iuli Godinet asked King to remember the workforce, as they are the backbone of the department.  “With all these 25-years you’ve been with this office, what is your biggest challenge in this office?” Fai’ivae asked.

King responded that “over the years, times have changed but one thing has remained — the biggest challenge is making sure that we have the workforce to be able to do the work.”

“You touched on the very subject of taking care of the workers. And it’s finding those workers to be able to meet the challenges of the job,” he said and cited one example — engineers for ASG vessels.

“We have a lot of mechanics on island but it takes a special mechanic in the belly of the vessel to be able to operate the engines in there. We don’t have a caliber of that person on island. We have to develop that,” he said.

“So the biggest challenge is maintaining that workforce to be able to continue.” he said and noted that to continue to train the workforce is also important.

In response, Fai’ivae told King, “I like your vision on that.”