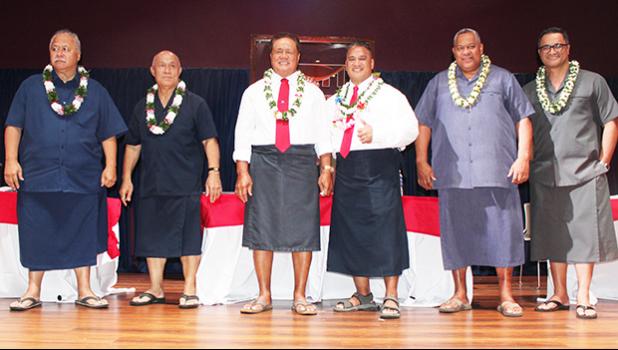 Supporters of the candidates, friends, business members, along with young voters attended the well prepared forum, which raised some of the many issues that American Samoa still faces today, such as telecommunication development, health care, taxation, and the procurement process.

The crowd appeared very pleased with responses from the candidates based on their applause after every candidate answered a question. The questions and issues were prepared by the Chamber and presented by three moderators.

Ahead of the forum, the Chamber had publicly announced a cover charge for both Chamber members — at $10 — and $20 for non-members.

Asked why a service charge to attend the forum, Chamber vice chairperson, Luisa Kuea told Samoa News that due to the COVID-19 impact on American Samoa’s many small businesses, they are struggling financially.

“As a non-profit organization, the Chamber decided to conduct a fundraiser in support of the Local Small Business Fund. We asked for donations and sold tickets to the event,” she explained. “Several donated more than the ticket amount to support the cause. ASCC students and young voters were invited to attend the event with or without a donation.”

The gubernatorial team of candidate for governor Senate President Gaoteote Tofau Palaie his running mate, candidate for lieutenant governor, Sen. Fai’ivae Iuli Godinet, weren’t able to attend as they were holding a campaign event that day.

Responding to Samoa News inquiries, Kuaea that “we were aware that there were potentially five teams. Weeks prior to the event, we contacted the Election Office for a list of Gubernatorial candidates so that we could extend an invitation to... the forum.”

According to the Election Office, “there was only one gubernatorial team that had submitted all of their paperwork and were officially registered to run for office. We did learn that another team was off-island,” she explained.

Samoa News understands that Al-Shehri is among local residents stranded in Honolulu with Hawaiian Airlines flights suspended through Aug. 31st.

Samoa News observed with interest that for the first-time in the past two decades covering election forums, a moderator had follow-up questions to a candidate’s answer in English. However, John Raynar — one of the three moderators — didn’t do the same with follow-up questions, when some one of the candidates - mainly Sen. Nua and Lemanu — answered in Samoan.

(See story elsewhere in this issue that examines the forum questions on the procurement process and the candidates’ answers. Other questions will be covered in upcoming issues.)