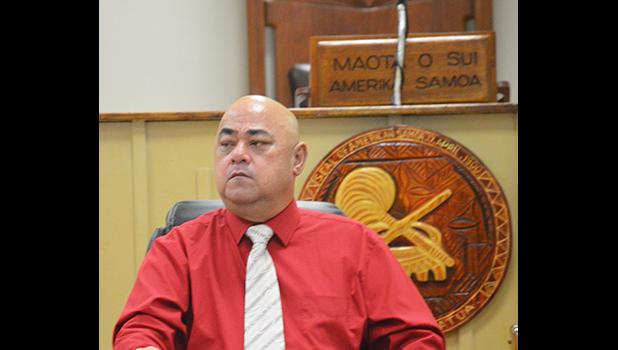 Pago Pago, AMERICAN SAMOA — The American Samoa Department of Education director, Talauega Dr. Samasoni Asaeli has decided to uphold the decision made by the Acting Governor during his site visit last week to close down the new Tafuna High School due to what appears to be an unsafe condition — until an official report is available for review.

Talauega appeared before the House Education committee this past Wednesday morning to discuss the status of school buildings before school starts next week.

The hearing was called by the House Education committee after receiving information from officials of the Department of Health regarding the condition of public school buildings around the island.

Talauega told the hearing, chaired by committee chairman, Rep. Vailoata E. Amituana’i that all school buildings that are not safe, including the new THS classroom building, will be closed down until his office receives an official assessment report from professional engineers on the status of the buildings.

Vice Speaker of the House, Fetui Fetu Jr advised the DOE director to carefully consider the issue on the condition of school buildings because the safety of everyone — most especially the children is more important than anything else.

Tualauta Representative Larry Sanitoa said that he’s worried about the construction of these new school buildings because it appears that there has been no oversight from the government side to make sure the construction is conducted according to the rules.

Other committee members stated during the hearing that a certified structural engineer needs to do the assessment of the school buildings to make sure they’re safe for students.

When questioned by Samoa News, about the THS building, the AS-DOE director echoed his statement made before the House committee.

“I’ve decided to uphold the decision made by the Acting Governor during his site visit two weeks ago to close the school building until I review an official report and opinion from a professional engineer regarding the condition of the building,” Talauega said during an interview with Samoa News at his main office in Utulei this past Wednesday afternoon.

The director stated that he instructed the THS officials to find space in other classrooms within the school for the use of the 8 classes that were assigned to the new building.

When asked whether his office received any assessment report from the Dept. of Public Works (DPW) regarding the building, Talauega said, no.

He said he discussed this issue with the director of Public Works and he requested an official written assessment report about the condition of the building before making any further decision.

Talauega said his primary priority is the safety of students, teachers and everyone with access to the building.

When asked about claims made  by the head of the Architecture and Engineering Division of DPW to local media that the building is “safe” and the cracks seen are just cracks in the plaster, Talauega’s response was, “Everyone has a different view of the situation and that’s why I requested a written assessment report carried out by a professional engineer for my review before any further action will be taken.”

On Monday, PWD director, Faleosina Voigt sent a crew to assess the building.

House faipule advised the DOE director to take a good look at the condition of the school building before making his final decision.

Several parents of THS students contacted Samoa News this week voicing their concern regarding this issue after Samoa News published a story about the building on Monday.

One parent told Samoa News that the safety of her daughter and everyone else with access to the school building is more important than anything else.

She stated that this issue was also discussed during a PTA meeting which revealed that during the tsunami alarm last year, when students and faculty initially scrambled on to the top of this new building, it didn’t look too stable — it seemed like it began to lean a little, according to the parent.

“The principal and the PTA president were made aware of this at the meeting, and it seems like it took a visit from government officials to catch this problem,” a parent said.

Another parent said that faculty and students witnessed the building lean during the tsunami evacuation last year and everyone was aware of the situation, “however, no one bothered to report it to government officials.”

“We cannot risk the lives of students and faculty. It cannot be stressed enough that people saw the building lean when stormed by students and teachers — and it was brought up at a PTA meeting for crying out loud,” the mother of a THS student said, adding that, “Let's recall what happened in Surfside, Florida when the condo collapsed killing at least 160 tenants.”

“An object hitting the plaster or the weight of the building caused the cracks,” the PTA member said.

He further asked, “If something happened to my son at this building, who will be liable?”

When asked for his opinion, the DOE director’s response was, “The contractor has nothing to do with this problem, their work is completed. The government will be liable if anything happens — and DPW is the government, they are the ones who issued the certificate of occupancy during the dedication of this work.”

The project is one of a series of projects funded by the U.S Department of Interior. The building was constructed by Nana’s Company, while supervised by the DPW.

Early Monday morning the Senate President Tuaolo M. Fruean, who is the husband of Nana’s Company president, contacted the Samoa News office to voice his disappointment regarding the Samoa News report.

In a loud voice, Tuaolo disputed the report and asked Samoa News to show which part of the building is “unsafe”.

Samoa News told Tuaolo on the phone that based on the information received, cracks were observed in the concrete foundation.

He said Samoa News must question an opinion from Public Works because they were the ones who supervised the construction. He stated that his wife (Nana’s Company president) was that very moment at the THS compound to check the building.

He swore at the Samoa News reporter — and then hung up the phone.

THS officials confirmed that representatives from Nana’s Company including their president visited the school compound and conducted their site visit to the building.

Samoa News took photos of the cracks it observed on the first and second floor of the THS building in question.

The initial construction budget for the building was $885,000. However, requests for a computer lab and the special education classroom necessitated changes to the building plans to accommodate these requests and resulted n the total building cost to escalate to $1,088,000.

Samoa News should point out that it did not say anyone was to blame for the work on constructing the building, only that “the building was constructed by Nana’s Company, while supervised by the DPW.”