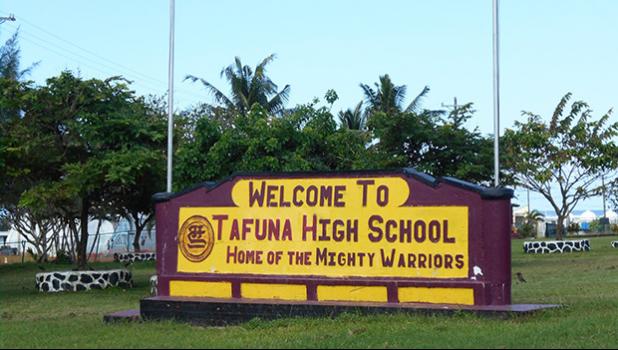 Pago Pago, AMERICAN SAMOA — The JROTC program at Tafuna High School has already been relocated from the lower campus of the school to make way for construction of the new centralized local Education Department building, despite a public plea from the school’s Parents and Teacher Association (PTA) to leave the lower campus alone.

ASG Procurement Office on Oct. 5th issued a notice of “Invitation for Bids” from qualified firms to provide “Construction of the Department of Education Centralized Administration Office Building” in Tafuna. Closing date for bid submission is no later than 2p.m. — local time — Oct. 22nd.

Government sources said yesterday that this project will be constructed at the Tafuna High lower campus, where the JROTC program for the school was located and has been moved to the upper campus. Also to be relocated to the lower campus is the E-Rate program office in Utulei.

Relocation of the JROTC was publicly revealed at last week’s Tafuna High gubernatorial forum, and some parents told Samoa News that they were disappointed with ASG’s action, as they were hoping the governor would reconsider moving the ASDOE main office to the lower campus which is also used for other school activities.

Two parents echoed what PTA president William E. Sptizenberg had said last month that there is other government land in Tafuna as well as Lions Park that ASDOE can use. “Why the lower campus and why now, when the school year has started?” said one parent, who points out that the JROTC program is now crowded in with other offices at the Tafuna High upper campus. “JROTC is great program for students.”

Sptizenberg told Samoa News early last week that they are hoping to meet with Gov. Lolo Matalasi Moliga on this issue before sending the governor their official petition. However, he said that as of Monday this week, they have not heard back from the governor.

“We will go ahead and send in our petition to the Governor as we are quite certain he doesn't want to meet us face to face,” Sptizenberg said.

In its online “Save Tafuna High School Lower Campus” petition, launched two weeks ago, asking the governor to leave the lower campus land for the school’s use, the PTA points out that this “is an important piece of land to THS where the JROTC was housed along with other classes and clubs for many years.”

Additionally, demolishing these lower campus buildings in the middle of the school year has now imposed undue burden on the teachers and principal of THS to make space for the JROTC and other classes that were housed in the lower campus.

Former THS-JROTC alumni — several off them residing in the U.S. — have responded in support of the petition.

“I’m a THS Alumni, and was also a THS JROTC product! That lower campus was a safe haven for many students in the JROTC program,” wrote one former student.

Another one wrote, “JROTC taught me a lot about discipline, respect, punctuality, responsibility, and much more. It has impacted my life in so many different ways and it all began from this lower campus.”

A third alumnus noted that “JROTC was one of the greatest programs this school has to offer. The discipline that it have taught me 4 yrs ago I am carrying throughout in life.”