Tourism focus for American Samoa — success is a community effort 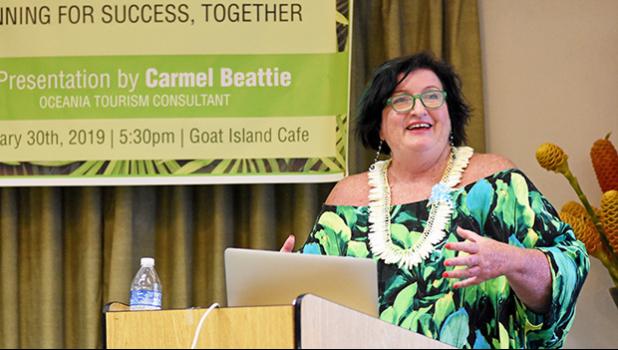 Her presentation highlighted American Samoa’s need to focus on developing itself as a unique product, over and beyond just being a beautiful destination. As she noted, in competition with many other Pacific destinations — they too are ‘beautiful destinations’. So what is it that ‘we’ have to offer?

She recommends that the American Samoa Visitors Bureau become more hands-on in the development of local tourism products, including ‘subsidizing’ products if needed, and said communication between stakeholders is most vital to moving forward in the same direction.

Beattie noted that tourism development in the territory is hampered by its budget — where other islands are spending up to $3 - $30 million, American Samoa is at less than a million; but it can still move forward, as long as everyone is on the same page, as to tourism goals.

Samoa News spoke to several attendees, who said that what she said was nothing new — and that the ASVB has been moving forward developing American Samoa as a destination, not only touting its beauty and friendly people, (i.e. cruise ships), but also as an event destination, such as fishing tournaments, festivals, etc. “Look at the ASVB website,” said one attendee.

Beattie said she had spoken to many of the stakeholders in the local tourism, including ASVB for input for her report. Of interest, she pointed out that developing tourism is a fluid endeavor — with adjustments and new ideas a constant, to keep tourism vitalized.

She also spoke of it being a community effort, that the people (their support and awareness) is one of the most important stakeholders for a successful tourism program.